I still feel the rush when tracking this hash tag for the February 17th Fringe twitter event. Chosen for the lesson imparted to Peter by his mother, we were optimistic that these four words would not only carry the message of thousands of Fringies “We are here and we’re watching Fringe live” across twitterverse but create enough social buzz to be picked up by non-Fringies curious about the tag. That curiosity ignited twitter on Friday night breaking all our previous records in length of time for trending!

#BeABetterMan hit Worldwide trends within 12 minutes and stayed there through the start of the show, trending for a total of an hour if not more. Following closely on the heels of Worldwide trending, #BeABetterMan showed up on the US trending topics and stayed there for well over 40 minutes as it was picked up by and propagated by non-Fringies. Our tweet numbers were strong enough such that if you trace back origins of the trend, you will find that the word “Fringe” is a top keyword that shows up along with the hash tag. (This is why while hash tag trending is great; associating it with the usage of “Fringe” will create the link necessary to tie the hash tag to positive social impressions for the show.)

Below are some screencaps of the #BeABetterMan trends across different countries. Due to time zone differences, we saw the hash tag make its mark in countries (Spain and France) hours after the US west coast airing and the hash tag stayed fixed in trending topics for most of the next DAY in Vancouver! 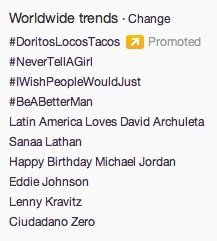 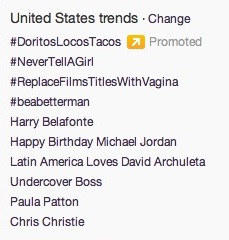 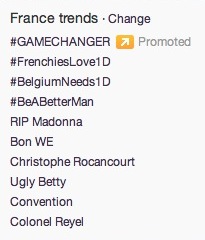 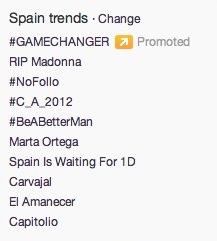 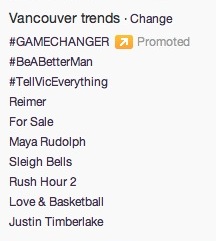 For those interested in the science behind trending, Hewlett-Packard (HP) published a paper last year studying social media trends. HP stated the following: “from all the content that people create and share, only a few topics manage to attract enough attention to rise to the top and become temporal trends which are displayed to users.” Further, most trending topics are derived from media news outlets that are retweeted and have an average length of less than 40 minutes in trending time. This is attributed primarily to passive consumption of information as opposed to content creation – which is what all of you Fringies are doing on Friday nights on twitter.

Be proud Fringies, we’re setting trends in multiple ways with this fandom. Your active contribution is making a difference! 🙂

Fringe attained its usual top position with GetGlue check-ins. Continue to thank the sponsors and advertisers. We’ve seen some warm receptions to our thanks and some even respond in kind.

I want to share a couple interesting graphs with all of you. This first graph represents the tweets numbers over a month for the following hash tags #Fringe, #TakeTheLead (4.11), and #BeABetterMan (4.13).  [Note: The #Fringe hash tag consistently has a strong presence on twitter, stronger than competing network shows. Peaks of #Fringe are found on Fridays.] As you can see, the #BeABetterMan hash tag peaked nearly twice as high as the #TakeTheLead hash tag, which was successful in its own right. The peak height of #BeABetterMan is comparable to that of the hash tag of a certain zombie cable show that paid for that twitter promotion. 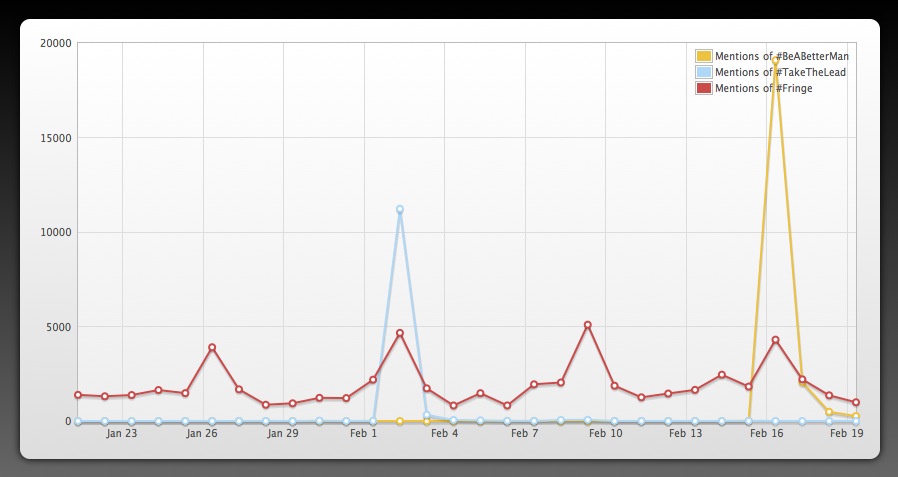 The second graph compares #TakeTheLead (4.11) and #BreakingOut (4.12) tweets over the last month. Tweets located at data points are specifically linked to Fringe. 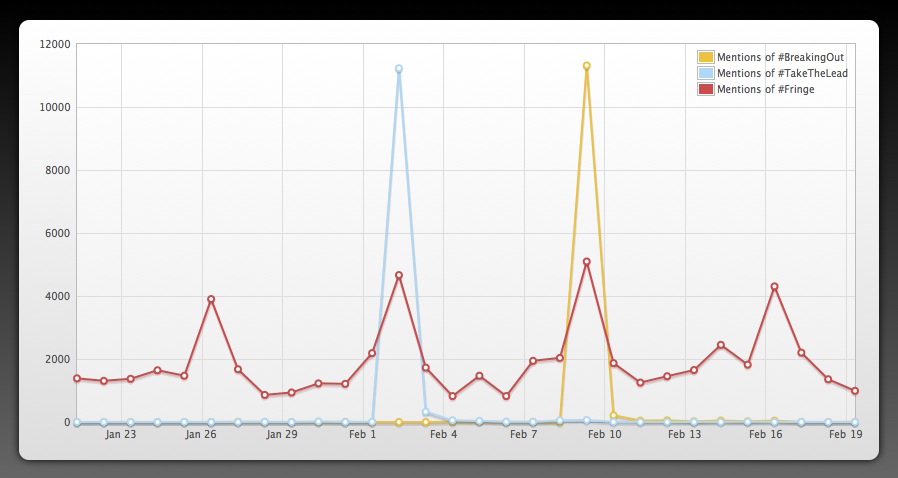 Other stats (provided by Nikolai3d):

A record 19,000+ contributors participated in using the hash tag. As stated earlier, this hash tag was taken up by non-Fringies, which help keep it trending but key tweets in the tracker ties these to Fringe-related tweets. The influx of participants resulted in a reach of over 8 million people and generated 23 million social impressions.

While not all impressions contributed to Fringe, through these experiences we’ll continue to hone our social buzz machine and work collectively to promote our wonderful show via social media vehicles.

Thank you all for your participation and contributions to these campaigns. It is truly exciting to see that we are reaching new territories and heights through unified fandom efforts.  Don’t forget, it is never too late to ask other new Fringies to join or get friends to support via retweet efforts.

This marks the 3rd week the hash tag for the Fringe twitter event is mentioned by @FringeOnFox:

Continued support from a local FOX station in Maine (@FOXTV23):