Fringenuity hashtag campaigns will be on hiatus until FRINGE returns. It’s just too difficult to trend when an episode is not airing. We will be back with a roar when Fringe returns FRIDAY, March 23rd, with A Short Story About Love. We’ll be asking  for your hashtag ideas, so think about it.

There will be some really cool activities coming up, so stay tuned!

Not that fans will be quiet! There are episodes airing for the first time outside the U.S.

Fringe fans from all over the world are very passionate. Spurred on by the success of US Fringe trending efforts, our friends overseas are making noise for Fringe in their countries. Our support is important because Warner Brothers makes revenue from selling licensing rights to other networks airing the show. If they make more revenue from Fringe from others sources, WB may be able to cut what it charges to FOX, which has first licensing rights.

We will help support these localized efforts. However, please keep in mind we need a united front when Fringe returns in the United States.

First, Latin America will be trying to gain the attention of Warner Channel, home of Fringe for their countries. They are asking for worldwide support from the entire Fringe community to trend #FringeOnWarner. 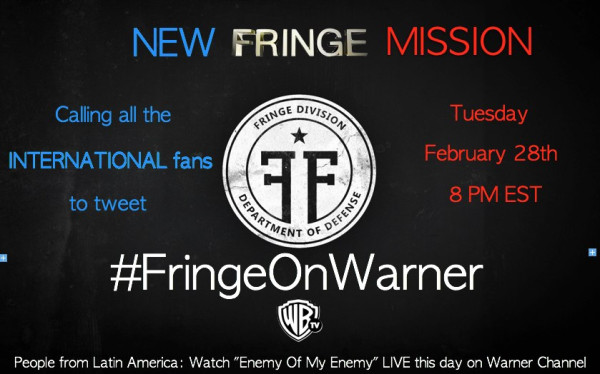 The United Kingdom will be leading an effort to trend locally in their country this Wednesday, 10pm on Sky1 (February 29.)

Their details for the effort are here.

The last  Glyph code from “The End of All Things” had an important message for us.

Together, using our hearts and imaginations, all of us can make Season Five a Reality!