We’re thrilled to announce the winners in our recent #FringeIsALoveStory contest! You guys certainly didn’t make it easy  – there were so many wonderful submissions, in some cases it was an extremely difficult choice. So here are our very talented winners, and fear not: if you didn’t win this time, we have more fun contests coming up shortly. 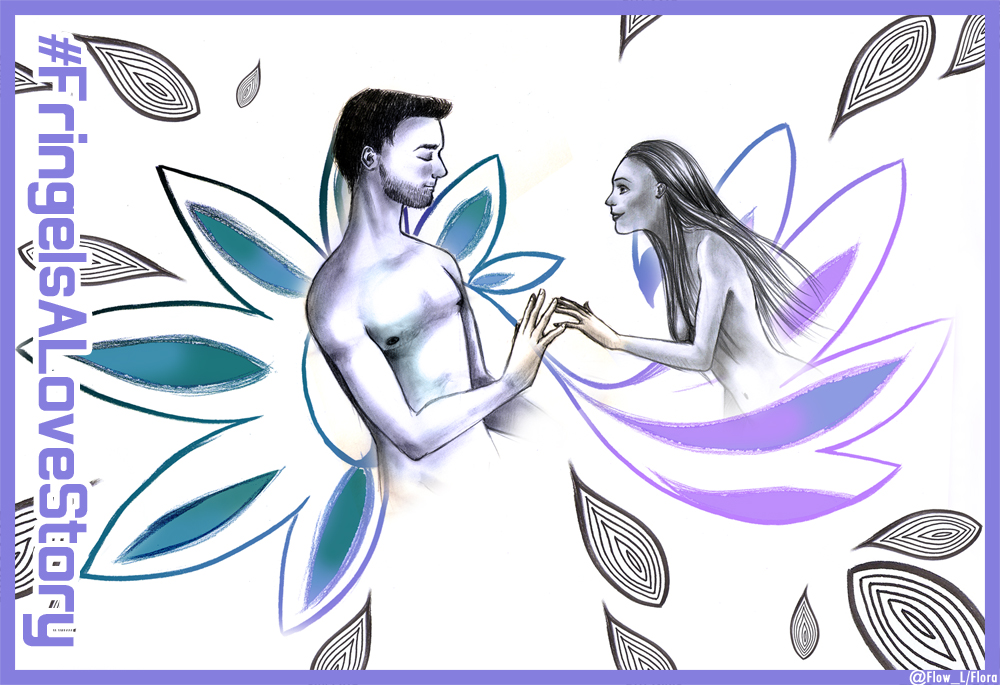 Composite work category: “I Remember Everything” by Lynette Pierce (@runpaceyrun) 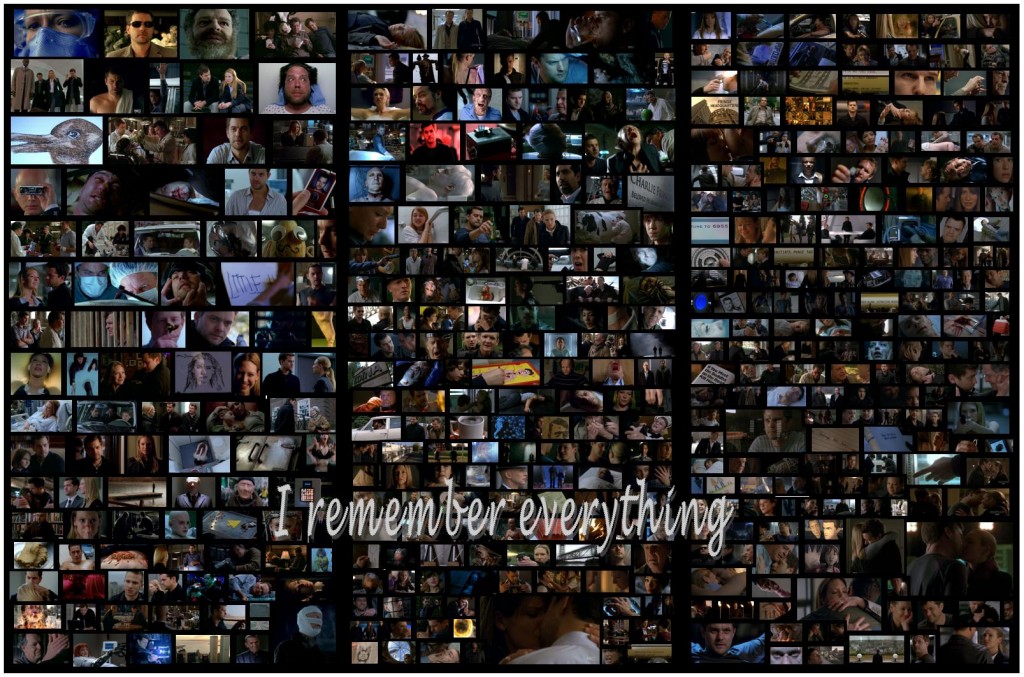 “Cut Him Out in Little Stars”

…”If there’s even a chance that he can turn this machine off, then I have to speak to him. I’ll find him.” Olivia Dunham nodded at Nina Sharp, and left the Massive Dynamic executive’s office in search of her next quarry, Sam Weiss.

Glancing at her watch, she noted that she’d been away from the lab at Harvard – away from Peter – for close to six hours. Even if she floored it, she probably wouldn’t be back in Boston for four more hours, and the way she had left things with Peter had her feeling uneasy. He had stopped her on her way out the door, and she suspected from the look on his face that he was preparing to say goodbye – not the temporary, “See you at home later,” they shared sometimes, but something much more permanent. She feared he was going to try and get into the Machine while she was gone, to spare her the pain of seeing what would most likely be his death. He was literally going to sacrifice himself to save the universe, and knew it was something that would be better done alone.

She couldn’t blame him for not wanting her there. If it were her, she’d do the same thing; they had no idea what the Machine was capable of. Peter’s nose had bled when he simply stepped into the same room as the thing. Walter told her after she had found out about the shapeshifters that he feared Peter’s proximity to the Machine had weaponized him. There were too many horrible possibilities to contemplate.

As she got into the car and took her phone out to plug it into the charger, she saw she had missed a call from Astrid; Massive Dynamic was one big dead zone for most cell carriers. She swore under her breath as she dialed Astrid’s number. “Olivia, thank God,” Astrid’s voice came through the phone.

“We don’t know yet. He’s still in the trauma unit. But he’s alive, Olivia.”

“Of course I will. I’ll call with any news. Drive safe.”

Memories of their nights together – the lazy Fridays of takeout and “Plan 9 From Outer Space,” the Saturday mornings spent watching cartoons and eating bagels – stormed through her mind as she drove to the hospital following Astrid’s call. She knew it; Peter had tried to access the Machine, and it had most likely violently rejected him. She shook her head in disgust – why in hell would they watch cheesy horror movies, when they were living a real one?

She suddenly remembered one night when they had broken their usual routine. They had been in bed one Friday night, and had actually run out of horror movies to watch, so Peter had grabbed the remote and channel surfed. Olivia stilled his hand. “Stop,” she said softly.

Peter looked at the screen for a moment, then turned back to Olivia. “Romeo and Juliet? Really? Not our usual fare.”

“I remember watching this in high school. It just broke my heart.” Peter shrugged, and they sank back into the pillows and watched the sad tale unfold. “She loved him so much,” Olivia sighed, snuggling against Peter.

“And he loved her just as much,” he agreed.

She smiled and murmured into Peter’s chest:

“Come, gentle night, come, loving, black-brow’d night,
Give me my Romeo; and, when he shall die,
Take him and cut him out in little stars,
And he will make the face of heaven so fine
That all the world will be in love with night
And pay no worship to the garish sun.”

Peter chuckled, “Damn, woman. And I thought I was a closet romantic.”

Olivia smacked him. “I’m just saying. Here’s this, what? Fourteen year old girl, and she knows, without hesitation, that this is the man she’ll love for all eternity. That even death won’t change that, as inevitable as it is.” She felt Peter stiffen in her embrace. “What? What’s wrong?”

“Nothing,” he said dismissively, trying to relax.

“Peter,” she commanded him, and he turned his face to hers. “You’re scared.”

Hesitantly, he nodded. “I know what I have to do, ‘Livia. I know I have to get into that Machine soon. And I’m pretty damn sure it’s not going to give me a nice backrub when I do.”

“Not an option,” he said matter of factly. “But, well… when it happens… when I get in the Machine… I dunno.” He waved his hands toward the TV. “I just need you to know… “

She stilled his words with her lips. “If it happens, which it won’t,” she whispered, “I’ll take you, and cut you out in little stars…”

They never watched the rest of the movie.

She approached the bed quietly, seeing Walter hovering over his son. “Walter?” she called softly.

He turned, his hand still gently resting on Peter’s forehead. “He’s so still,” he said sadly. “It just threw him like a rag doll. The sound… he hit the floor so hard… and so much blood… ” His fingers ghosted over the cuts that peppered Peter’s pale, still face. At the touch of Olivia’s hand on his shoulder, he added, “He didn’t want you to have to see it.”

Walter nodded, none too sure. Turning to face her, he said, “I’ll give you two some time alone.” He shuffled from the room in search of the hospital chapel.

Olivia sat down at the bedside and look at the monitors or a moment before taking Peter’s hand in hers. “Give me my Romeo,” she said tenderly as she brushed a slightly curling lock of hair from his forehead, mindful of the electrodes. “You sure know how to make a grand gesture, Bishop. But I’m not quite ready yet to cut you out in little stars. I want my time in the garish sun with you, ya hear me?” She stood and brushed her lips against his. “I’m gonna find Sam Weiss, and we’re going to figure this out. You just rest. You’ve been strong for me. It’s my turn now.”

Olivia Dunham didn’t like to lose. And now that she had everything in the world she wanted right before her, she’d be damned if this was the one time she failed. Because she had another arrow in her quiverl now, one she hadn’t had before. She had love. If anyone had suggested that to her a few years ago, she would have laughed. But now? Cortexiphan be damned – that was the most powerful weapon in the world.

What is the equation for the love of this show?

Is it the sources? -such as the writings of Crichton , the film Altered States, the films of Cronenberg? Or is it the creative three of JJ, Roberto and Alex, that it inspired?

Is it the incredible team they gathered to put this collaboration into working order?

Perhaps it is the acting talent they brought together to breathe life into what was merely a written page.

Or maybe its the characters they portray- each one with such complexity and depth.

Some may vote that it is The ideas of the show-Science Fiction-Real Science Ideas-Mysteries-Romance-Action-Intrigue-Horror and Wonder.

Or is it about The big picture of the story that all of the ideas are used for? Like building blocks for a greater design…. You know it is there but cant fathom what it is,… yet you enjoy the journey, as the blue prints of the master plan are revealed a piece at a time.…Maybe you have seen it all along -its been right in front of you hiding in plain site-

Could it be the procedural aspect- the thrill of the moment?

-Could it be that- The heart of the matter- is that love is the catalyst of every thing-the passion that fuels the fire to make decisions that affect universes?

-Is it How the show makes me think long after I see it, pondering about the show, or ideas posed during the show. for hours, days, maybe the rest of my life?

–How it inspires me?

So many times in Fandom- a strong line can be drawn in the sand (and that’s not always a bad thing). Fans in Fandom can be the toughest critics out there, but with Fringe Fandom I have seen an amazing absence of disagreement. We are the most unified, organized group of people, with a singular vision of keeping the show we love alive long enough to complete its story without shortcuts because it truly is a great story in so many ways.

-Like an army we prepare and deploy to make it known to the providers of this show that we are here and that Fringe is the kind of show we want for all of the reasons listed above. We watch it live, we tweet our thoughts…and through the tending events……the excitement at what I/ we are doing…. something in the name of some thing we love……words fail at the pride I feel.

After the show we talk amongst ourselves in awe to each other, all interacting detectives, as we throw around our theory’s and laugh or cry at character moments.

Incredible personal ties form as we think “Hey this is great, some one thinks like I do!!!” “Wow we all like Fringe here!!!”

-I feel- in a world ready to roll its eyes at such high concept ideas- we find a fellowship of kindred spirits – friendships – I hope will last long after the show tells its story.

-All of this you have just read- are a series of incredible events that equate into a simple idea of symbiosis.

The Show needs its Fans and the Fans need the Show –

All entries to the video category can be seen here.  Written entries can be read here. Visual entries are here. Please take time to look them all over, they’re all wonderful. Thanks for your participation everyone!! Stay tuned for more Fringenuity hiatus fun!