Tuesday night (August 7) I couldn’t sleep, and it really didn’t matter since we had to leave for Yeager airport in Charleston, WV at 2:30 a.m. Wednesday morning. Plane left for Atlanta at 6 a.m. and then off to Seattle. The plane trip was boring and routine, but I did feel awed at the view of the Rocky Mountains. I arrived at SeaTac around 10:30 a.m. PST. Annie (@birdandbear) had arrived only minutes before, so we met at her baggage pick-up with hugs, since the last time we had seen each other was after WonderCon in March.

Then… we waited. We both had tickets for the same Quickbus to Canada at 2:30 p.m. The idea was allow a cushion in case anything went wrong with our flights. Well, everything went off without a hitch. A lot of time was spent chilling on top of some rocks. Yes, rocks. There were large granite slabs outside the airport near the bus loading area. I commented to Annie that the rock was loads more comfortable than Delta’s plane seats.

Finally, it was time for our bus to Vancouver. Sadly, this part of the journey was not as epic as we had envisioned. First, the driver was highly unorganized. Next, our bus smelled. You know, like a bathroom that has not been cleaned. The driver had to scan our passport cards, but his machine was not working, so we had a “wonderful” side trip to downtown Seattle so he could obtain a new one. After a bottleneck due to construction, we were on our way.

The stop at the border was fairly uneventful. We explained that we were going to a fan convention for a show that films in Vancouver, told him how long each of us was staying, and what we did for a living.  After several delays—and near gagging to death on the stench—we made it to the Coast Plaza Hotel almost two hours later than expected.

Lesson: Don’t take QuickBus if you value breathing and being close to a schedule. Glad I am taking the BoltBus back…

We were greeted by @runpaceyrun, @fringeship and @tribeoftyrones! Hugs all around! Annie and I were starving, so we made our way to the nearby Olympia Greek restaurant. Good food and good friends! Then sleep for my first night in Vancouver.

Thursday was spent getting acquainted with the city and meeting Fringies. A large group of us met at Earl’s Restaurant. Later, the present Fringenuity team met with TFE organizers to discuss the event and filming location walking tours. I had tweeted a pic of Fringies to Joshua Jackson, and I received quite a nice reply! 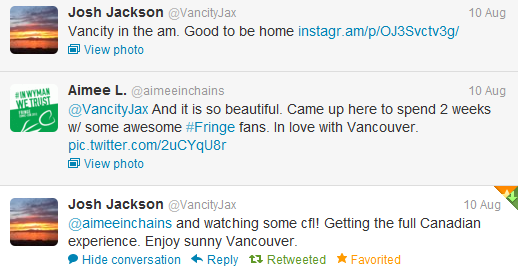 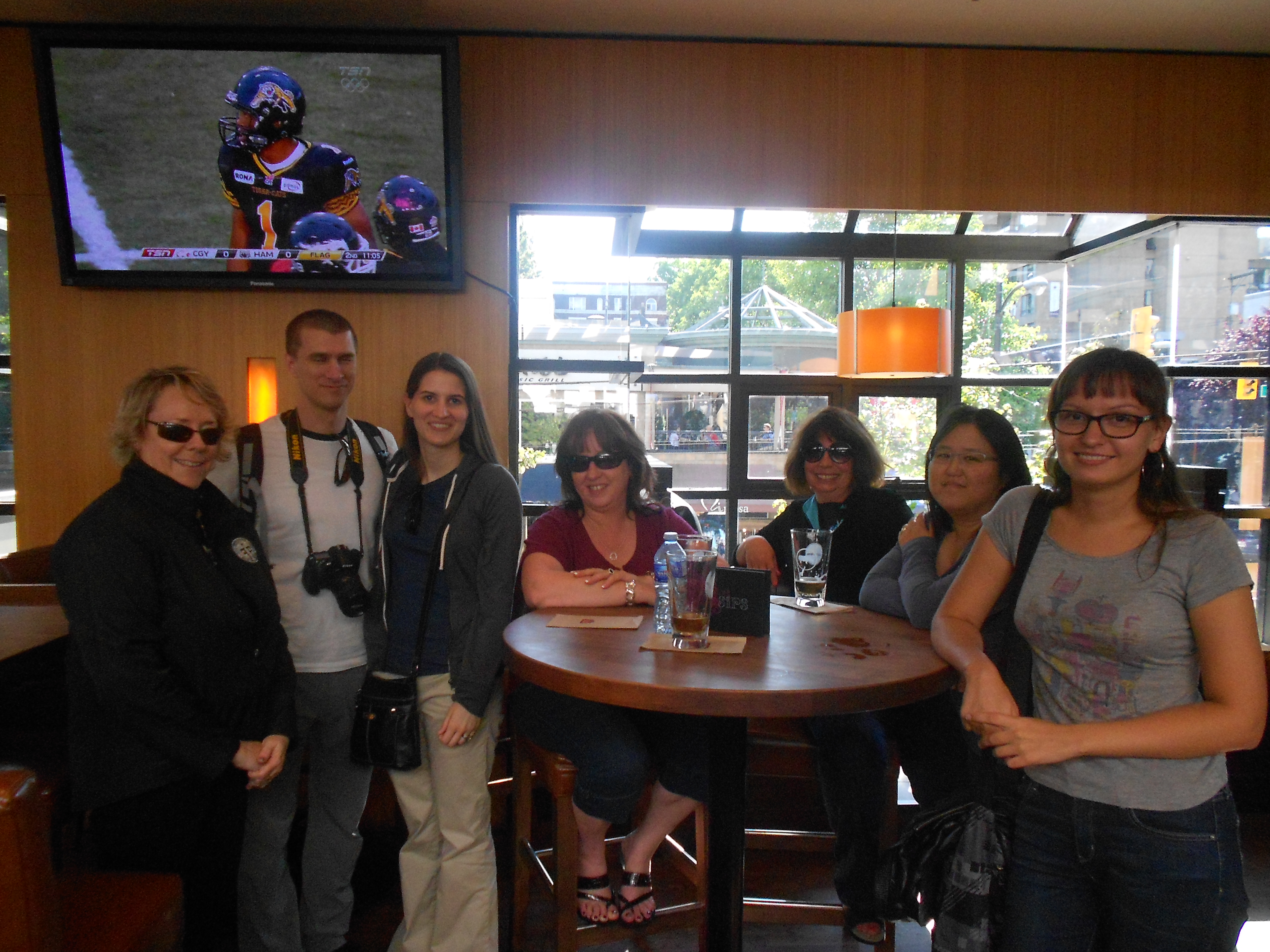 On Friday, we received word that Fringe was filming at Terminal City Ironworks. Little did @Dixiegirl256 and @brownbettyhigh know when they made their way to our hotel room, that we were going to the filming. The original plan was to go grab lunch together, but on this trip, everything is subject to change based on Fringe filming. So, we headed out there, and waited around. We noticed many extras, and the wardrobe/makeup trucks. We saw one woman dressed up as a geisha, and some of the extras looked like they were dressed as rock music fans. Another group of fans and local autograph collector @Canadagraphs was there. 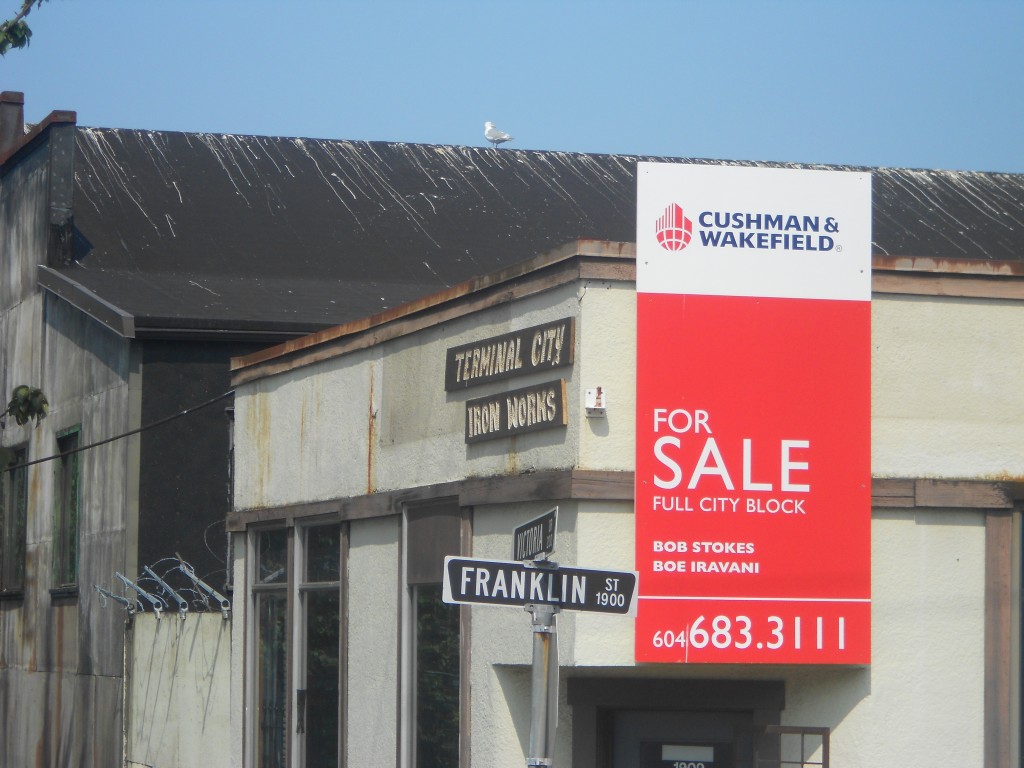 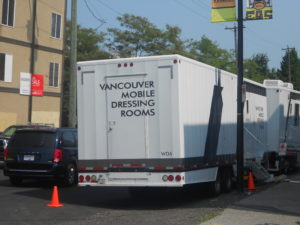 We picked out a nice spot to camp out, and it wasn’t long before a crew member, Gavin, came out and talked to us for a bit. He was really great to talk to. We saw Georgina Haig, Jasika Nicole, and Joshua Jackson pass by on their way to their trailers for lunch. As Josh passed us the first time, he said, “Enjoying the weather ladies?” We played it cool, and were respectful. Our number one rule is to not be pests to crew or cast. If they want to talk with us, they can come to us.

After a while, Jasika Nicole came over to us. She really wanted to thank fans for their support and was more than glad to sign and take pictures with us. She recognized the bag that @DixieGirl256 was carrying, because it was one that she had made. She was so sweet and energetic in person. Sadly, I look like Hell in my pic with her, but that’s OK. She signed my ComicCon TV Guide.

Later, who should we see crossing the street, but John Noble! He came right to us. We asked how he was feeling after his break due to his sleeping issues, and he said that he was better, and so grateful for the love and support from fans. He also discussed how they were happy to be back for S5 due to the tremendous fan support. I’ll always remember him telling me, “Come here, Love,” when getting a pic with him. He also signed my ComicCon TV Guide. 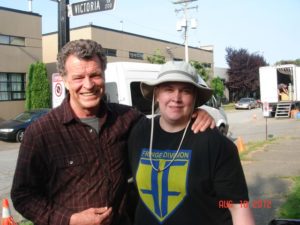 It was soon time to head back for the first night of TFE. I had a presentation to give, and a moral quandary: Do I miss what may be my one chance to meet Joshua Jackson—who plays my fave all-time character—or do I keep my commitment to do what I said, and was scheduled to do? I chose to go back, although it hurt. When I got to the venue, I also learned I could have stayed because the audio system was not working properly. Emma had tried to contact me, but I did not have access to Twitter while “out in the field.” My presentation would have to wait until Saturday. Although I was happy for my friends, a part of me hurt inside when I found out that Josh did talk with them. They did think of me and have Josh sign my copy of his Beyond the Fringe comic book.

But the introductory night was lots of fun, and I met a ton of Fringe fans. Plus,  I got to meet the location scout for the show, Tom. Someone told Tom that I was part of the group that organized the social media campaigns, and he said, “So I have you to thank for me still having a job?” I probably was beet-red from blushing, but to hear this was probably the best praise that one can receive. I said we were a *small* part. We talked about his job, the fans, campaigns, and I loved the fact he worked for The X-Files and Eureka—two of my other fave shows. His insight into how shows choose filming locations was interesting and I wish that we had more time to talk.

And my choice to come back for the presentation was the right one. Karma is good.