SIMON FOSTER: When I was in my freshman year at college — I’m at Stanford. And in the middle of the night, my roommate comes banging on my door. Tells me to wake up, come check out the TV. I tell him to go away. I… I have a girl in my bed. But he won’t take no for an answer. So me and the girl… Emily… We get dressed, go to the common room. On the TV they’re showing footage from… Chicago, L.A… London. Observers going from house to house and… dragging people out into the street.

SIMON FOSTER: I’m watching people… being dragged from their homes, led into the street, and being… put down like dogs. And suddenly… I knew. I don’t know how, but… I knew. That’s… why my parents sent me so far away for school. They were part of the resistance. They — they sent me away to protect me. That was the night they were killed. And that was the night… I knew I wouldn’t give up… until the Observers had gone.

Imagine it is 2015 . Where do you see yourself? Suddenly, bald men dressed in suits and wearing fedoras appear all over the world, demanding control — Those who resist, are targeted. The Purge has begun. Do you join them? Go into hiding? Die fighting?

Tell us your whereabouts and reaction to the Observer invasion in a tweet.

Here are the tweets we received.

Winner will be chosen at random. The prize is one (1) Preorder copy of “September’s Notebook.”

Entry is open to international fans. We will ship worldwide

Entries will be accepted until 12am Pacific, Friday, September 28, 2012 — The day of the Season Five Premiere.

Entries will be collected and linked in celebration of the start of Fringe’s epic final season. 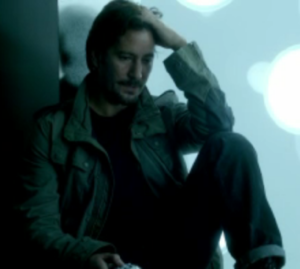