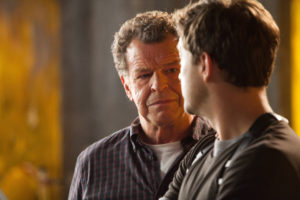 Despite the mood from Etta’s death, we had a great deal of fun during this past week’s Twitter event. #ShowNoMercy trended before the airing of An Origin Story, and during almost the entire duration of the show. Not too bad, considering the Hurricane relief telethons that aired on several networks that night. (Please see the message at the end of this post regarding the hurricane.)

The hashtag was also very accurate, as we saw the shocking manner in which Peter dealt with the Observer captive.

This week we’ll see the consequences of Peter’s quick decision to implant the Observer tech into his body. The quest to fulfill Walter’s plan also continues in Through the Looking Glass and What Walter Found There. This title is obviously influenced by Lewis Carol’s book, “Through the Looking Glass and What Alice Found There, ” a favorite of Fringe producer J.J. Abrams. Plus, this was the easter egg in An Origin Story.

“Go Ask Alice” is a line from the drug-influenced song  “White Rabbit,” by Jefferson Airplane. The song has been played in the show. The rabbit is thought to be a symbol of people chasing their curiosity.

The book has themes of reality perception, existence versus non-existence, and nonsense. Looks like we’re in for a strange episode this season after all, if the promos and this picture are any indication.

“Why it’s simply impassible!
Alice: Why, don’t you mean impossible?
Door: No, I do mean impassible. Nothing’s impossible!”

As we know, in Fringe:

1) Don’t use #NothingIsImpossible before the designated time: 1 HOUR before Fringe airs.

The event will take place 1 hour before Fringe airs – 8pm EST — November 9. Gently remind others that use the tag before the event to wait until the right time, and tell them that using the tag too much beforehand will lessen trending impact. This happened when Fringe fans tried to trend #WhereIsPeterBishop for the season four premiere. The # had been used all summer long, was not anything new on the Twitter radar, so it did not trend. Trending happens with terms that are relatively new, and many people tweet about them at the same time. Terms break out onto the scene, but trending becomes more difficult the more they are used. Be nice! We want everyone to feel welcome.

2) One # term per Tweet. Use only #NothingIsImpossible (What Are Hashtags?)

Think of all of the cool, “impossible” things that have been seen on Fringe . Cool tweets are more likely to earn re-tweets, and this immensely helps trending.

I’m taking a moment to ask fellow Cortexifans to consider donating to Hurricane relief efforts. This disaster is Fringe event in scope, and has affected many people. I personally know a number of victims. Our own graphic artist @Cheribot lives in Long Island, and has seen the damage firsthand. Staten Island was nearly wiped out, many homes in Queens burned, and there is significant damage to the public mass transit system. New Jersey is still reeling.  Many are without power, and bitter cold weather will be arriving soon. Gas is in short supply, and rationed.

Here’s how you can help:

Blood supplies are low, so making a donation is extremely helpful.

The Salvation Army Provides hot meals via mobile canteens in disaster areas. I  have seen these in action, and they make a huge difference in people’s health and morale.