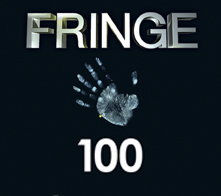 Hello, Fringies!  This week is a bittersweet one indeed for all of us. The final filming is taking place as I type, and hopefully is free from those who seek to ruin surprises. Joel Wyman — bless his huge heart — is keeping us updated on Twitter and is documenting the process for fans. It’s been said many times, but never enough: We are so lucky to have such passionate people making this show, because their love shows in each and every aspect.

Last week’s event was a success, with trending in the US and Worldwide for a nice duration. The West coast trended Fringe for a few minutes. 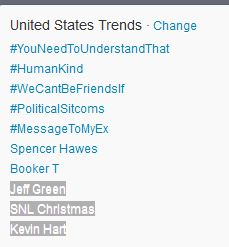 US trend for #HumanKind 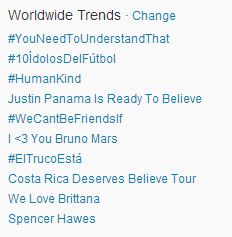 The Human Kind was another turning point for our Fringe team. Olivia has always been good at getting people to see things her way, and she was thankfully able to remind Peter that memories and love will keep Etta alive in their hearts. She has made an imprint on their souls that cannot be erased.

Windmark has seemingly made a gross miscalculation in taunting Peter with Etta’s last memories. To take a cue from Muse — for the Human Kind — “Love is our resistance.”

Fringe is a story of consequences, and I don’t think Peter is free and clear from the repercussions of inserting the Observer tech.  Just what those may be, remains to be seen. Personally, I speculate that he may have retained higher cognitive function, a skill that could come in handy for say… making sense of a certain scroll full of advanced physics equations?

So, this week, the plan will move forward.

Once again–just like in Brown Betty and Lysergic Acid Diethylamide — Fringe is going for the strange and unbelievable, with a little help from some “recreational” drugs. In episode 5.09, Black Blotter, Walter takes a “trip” down memory lane, and there will be some surprises for longtime fans of the show. It looks like the team is “off to see the Wizard.” But who is the man behind the curtain? Will we finally see “Donald?” In addition, Peter and Olivia “follow the sound” of the radio left for them to what amounts to a forest crime scene.

Fringe has referred to the Wizard of Oz many times throughout the series. Some examples:

WALTER: Just because no one has documented flying monkeys or talking lions yet hardly means they don’t exist.

WALTER: I’m learning to appreciate cowardice. The lion had a point.

PETER: But again, that was just a movie. And there’s no flying monkeys inside the grocery store.

In The Firefly, Walter is listening to a record play, “If I Only Had a Brain.”

Peter — as a “machine man” or engineer — also seems to signify the Tin Man and his quest for a heart; Walter is searching for his brain or sanity, so he’s like the scarecrow; Olivia could be the lion who has gained courage.

In Season four — and pretty much throughout the series — all Peter wants to do is “go home,” like Dorothy. He referred to Lincoln Lee as “scarecrow” and Walternate’s Fringe Division minions as “flying monkeys,” in Back to Where You have Never Been.

Alternate Olivia keeps looking up for rainbows. Rainbows are prominent in the series, so much so, that I am betting that we see at least one before the series ends.

It is also evident from the end-of-episode promo that the episode may have had some inspiration once again from science-fiction-literary-wizard Phillip K. Dick’s, “The Man in The High Castle.”

This week, rip open your consciousness, but will you believe everything that you see? 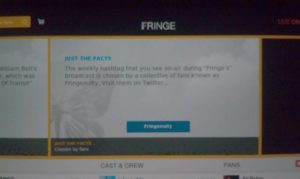 1) Don’t use #FreeYourMind before the designated time: 1 HOUR before Fringe airs.

The event will take place 1 hour before Fringe airs – 8pm EST — December 14. Gently remind others that use the tag before the event to wait until the right time, and tell them that using the tag too much beforehand will lessen trending impact. This happened when Fringe fans tried to trend #WhereIsPeterBishop for the season four premiere. The # had been used all summer long, was not anything new on the Twitter radar, so it did not trend. Trending happens with terms that are relatively new, and many people tweet about them at the same time. Terms break out onto the scene, but trending becomes more difficult the more they are used. Be nice! We want everyone to feel welcome.

2) One # term per Tweet. Use only #FreeYourMind  (What Are Hashtags?)