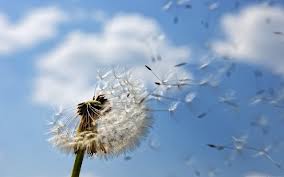 It is here. The final week before the Fringe finale is upon us and the realization is sinking in that the on-screen journey of these wonderful characters will be complete. Our Fringe family – us and them – will never be the same.

Although we come from many backgrounds, ages, and all walks of life, we’ve become such a tight-knit community.  Over the years, many of us have found friends among the ranks of Cortexifans from all over the world. We have laughed together — cried together — fought together to keep this story alive.

Many have nurtured creativity in someone else through encouragement and mutual sharing of an interest such as art or writing. Others have enjoyed listening to podcasts and sharing their theories. Several contribute to Fringe websites like Fringe TV and Wormhole Riders. Some have literally had their lives saved either directly or indirectly due to this show. No joke: We have heard the stories.

I never knew that when I made the choice to sit down and watch The Road Not Taken,  that I’d be hooked, and it would set me down a path that has led to this point. It is fitting in a way that this episode about choosing our paths was my first.  At the start of season 3, I set out to find other fans and found Fox.com and Fringe-Forum, where I came across fans of all kinds. I still talk with one long after leaving those forums; she went by the screen-name “RoughDiamonds,” but I now know her as @Fringeship–as Kelly–my friend. A chance meeting on Facebook and our failed attempt at Fringe promotion led me to Annie — @birdandbear — who would become the General Grant to my Sherman. The decision to join Twitter would be a turning point — I was immersed in the fandom. 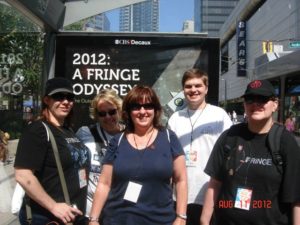 In the end, this show really is about people. How many of us connected because of a mutual love for this show? And found that we had oh-so-much-more in common? Feel free to share your story in the comments.

I am no fool. I know that our Fringe family will drift apart as time passes. Such is the way of life. People come and go all of the time, but they each leave us with something; hopefully a positive influence or inspiration. There will be new Cortexifans to welcome over the years as more people find out what the heck they were missing due to Netflix streaming, Science Channel syndication and DVDs. Some will stick together, but we will no longer be the cohesive force we were.

This week will be difficult in some aspects. On one hand we’re overjoyed that Fringe will be ending on its own terms. On the other, it is so hard to Let Go. The last scene between Olivia and Peter in The Human Kind has a lesson for each of us: We never have to let go. Fringe will be kept alive in our hearts and in our imaginations as long as we remember it. 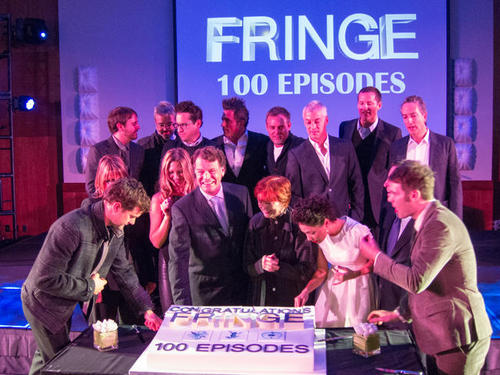 Fringenuity will not be going anywhere after the finale. There’s a fandom history book in progress, and we’ll stay on top of Fringe books, convention appearances and such. We’ve also been collecting Fringe websites, articles, reviews, and all kinds of material about the show for an online archive that we’ll release in the near future. Thank you all for your support over the past year. It has truly been an experience of a lifetime.

We will announce something very special for fans on Sunday, January 13th in celebration of the anniversary of the #CrossTheLine event.

Fringe Activities To Celebrate the

Show with a Bang

FOX will have an unknown hashtag for An Enemy of Fate.

We thought it would be a great payback to all of the folks who have made this epic ride of the past year possible if we asked the fandom for hashtag suggestions for the next-to-last episode, Liberty. In the past, we tried to use tags that were general enough to catch the interest of other Twitter users, as a way to increase trending and to possibly generate interest in Fringe.

With the show’s finale, anything Fringe could be used. It’s a celebration of our show, and we have a feeling Twitter will explode from all kinds of Fringe goodness that night.

We’ll take the best suggestions and yours could be included in the list we offer FOX for approval. Tweet us your suggestions without the #.  There is a 22 character maximum, which includes the #.

We’ll be posting artwork and videos on our Pinterest page in honor of the creative people in our fandom. If you have a favorite Fringe artist or artwork, let us know.

@Nikolai3D is working on an icon matrix featuring every icon we’ve offered for ever Fringe Twitter event.

Fringenuity looked into sponsoring sponsoring a Google + hangout for fans before and after the finale airs all the way past the west coast airing. However, hangouts are limited to ten individuals. Some folks might want to get together with other fans and arrange their own hangouts that night, so they aren’t alone. Personally, I have a feeling I may want to hide in my room for a bit before publicly engaging with the fandom.

Our friends at Fringe Circle will be hosting hangouts:

Many Cortexifans will gather together on this night to say goodbye to our little show that could. Surely there will be plenty of Fringe-inspired food and drinks, plus costumes and Fringie decorations. We want photos from your Fringe party to share. You can tag them on Twitter:

Pick a Fringe-related theme or idea and make a fanvid about it. Let us know so we can share your work. Examples: POlivia, Walter food moments, most disgusting moments, etc. We will be releasing a video about the social media Fringe effort.

This Is Not the End…

This is a fan fiction challenge based on Joel’s comments about fans being able to get into a car the day after the finale and imagine what the characters are doing.

Write a one-shot story about the lives of our heroes after the finale; sort of an epilogue.

Of course this needs to be written after the finale, but as we know, Fringe will live on in the fan fiction community. When you post, send us a tweet or email to let us know. We’d love to read all of the stories.

What Our Friends Are Doing

Check out our friends at Pop Culture Nexus, who are celebrating with a Fringe Week.

The Fringe Podcast will have a very special guest this week: Ari Margolis. Tune in live, Sunday, at 2 p.m. EST.

Our friend, the ever-resourceful “Shirtless Frank,” wants your video reactions to watching the finale. Don’t worry, Shirtless Frank is not some creepster who wants to sell your vids to some fan-fetish website or something…

She made the Where is Peter Bishop Video. No big deal. 😉 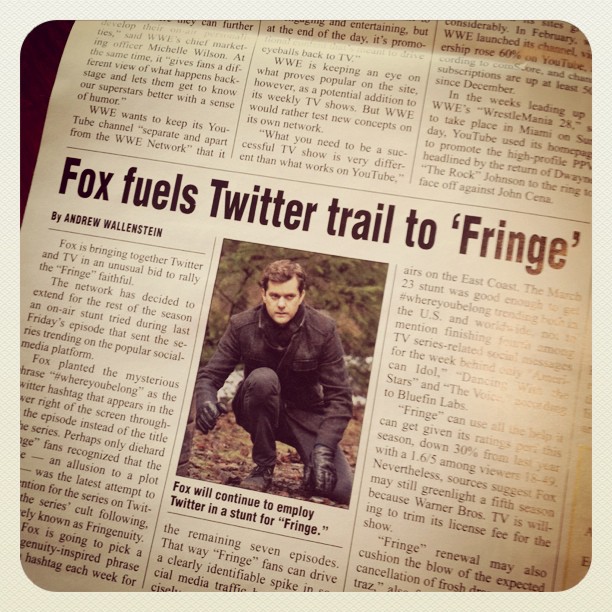 Article that appeared in Variety – pic from @jonxproductions