We have been planning to generate some social media buzz for Almost Human, since it was officially picked up to series by FOX. Deep in the shadows of Facebook, a group was established—Almost Human Task Force—in order to provide a place to collaborate on art, marketing, and social media strategy. Our team has topped out at 17 members, with a variety of talents, most of which worked with or were well-known to Fringenuity.

While morethanoneofeverything.net has served as the home that launched a large, unifying fandom movement, it was decided that a new domain, website and Twitter account would better serve Almost Human fans, especially once the show launches.

As part of our team, @Hanko9 offered a home for the site and furiously worked all weekend to get the face of the Almost Human Task Force running. His hard work has produced a slick, well-organized and adaptable site.

Almost Human Task Force has a home at:

The most important thing to know is that at the eleventh hour, FOX changed the series premiere date. 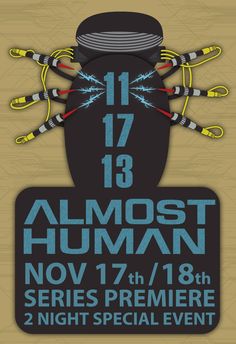 There were tons of billboards, bus, and subway posters that were advertising the old date, and people were tweeting and posting pics on other social media. Our poor artists had to scramble to remove any artwork featuring the old date. And this put a dent in the celebration we were hoping to have due to the Fringe connections for Almost Human and John Noble’s debut on the November 4 episode of Sleepy Hollow.

Thanks to the artists, all materials have had the dates changed. After working so hard to drill a date that no longer matters into people’s heads, it now important to get the word out that FOX is planning an event, yes an event, for the series. There are going to be people who tune in Nov. 4 hoping to see Almost Human and they’ll find Bones instead. Which is a plus for Bones that night, I guess, but not for this show.

While I am sure that FOX will blitz the airwaves with promos advising of the new nights, we should be prepared to help people on social media who are confused about why Almost Human is not on. (I just hope the basically forced ratings numbers from having a football lead-in doesn’t backfire and make the show look bad when that number deflates for subsequent episodes… Cross your fingers that there’s enough to catch the long-term attention of a lot of people who see it after the game.)

Feel free to use and share the artwork at the Almost Human Fan Art Matrix to get the word out, and let’s chirp a bit more about this series. Tell the world why you are ready.

Sometime during the next few weeks, there will be a post that further delves into how we can best tailor our tweets to aid the Nielsen social TV ratings. Stay tuned!