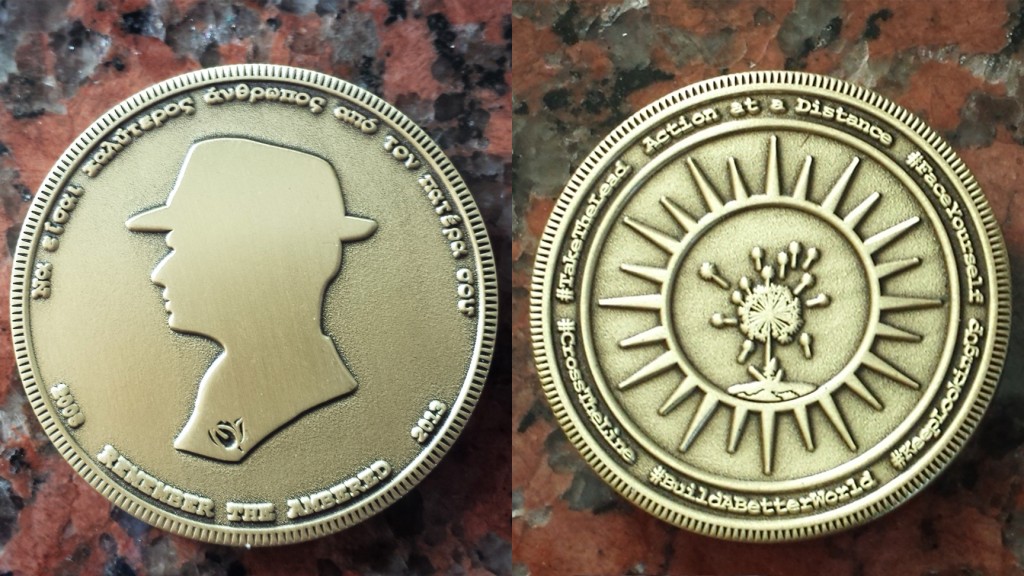 All of the orders have now been processed and shipped. Most Americans already have theirs, and Internationals should start getting theirs next week. Tracking information has been provided where available but most of those international orders have to fly on faith, as tracking would have been quite a bit more expensive.

If you’re just now hearing about the project and want to buy a coin, hold tight, we’ll talk about the next step after the project report.

So here’s how the project broke down, for anyone interested in the gritty details:

Once again, it’s been an honor and a privilege serving the Fringe fandom. To everyone saying thank you for making it happen: it’s my brand of joy to be able to make people happy while raising funds and awareness for such a wonderful cause. It’s an awesome niche to fit in and it really is my pleasure.

I already said some stuff about carrying the fire and paying it forward in that overly sappy letter that went out with the coins. So get out there and find someone to be kind to, every day. Kindness is as good for the giver as the receiver, and your heart will be lighter for every heart you touch.

As expected, the influx of tweets and photos of delivered coins has attracted a number of people who missed the order period and are keen to acquire a coin. Guys: don’t fret, it’s not over. Raising money for Random Acts was only half the project, making fans happy was the rest. There are still several coins available, but they’re on hold in case of lost mail for those who’ve already ordered. For now I’m going to start a wait list: to add your name, please email Fringenuity@gmail.com with “Wait list” as the subject line, and your desired quantity in the body.

Once the first batch of shipments have all been delivered (let’s say 3-4 weeks to be sure), I’ll contact those on the wait list in order of their response – coins will be $15.00 + shipping. If there’s enough interest to cover a second run of 100 and still raise funds for the charity, I’ll consider it. (First run collectors, don’t worry; if we do another round, there will still be only 300 of these in the world. They’ll still be a lot rarer than the originals.)

For now though, I have this little box of coins, and this big idea of making the world a brighter place, so…

Let’s have a contest!

Inspire me! Taking a page (sort of) from the Random Acts playbook, I have five coins available for five people who can send me a photo of you doing something kind for someone.* This needs to be something that requires a little effort; a picture of you petting your cat won’t do it, I trust you pet your cat anyway. It also doesn’t need to be expensive: raid your bookshelves and donate the gently used culls to an assisted living facility or shelter, make a care package for an under-appreciated teacher, or leave an encouraging note for a stranger. Make it a good experience for you as well as for whomever you choose to reach out to. Keep it legal and safe, and have fun. Winners will be randomly drawn on March 13th. Tweet your submission to @Fringenuity to enter.

Get creative. Get kind. Get going!

*If you’re allergic to cameras like I am, you don’t have to be in the photo. I just need evidence.  😉