We all know that the LIVE ratings for Fringe aren’t too great. But we need to demonstrate to the businesses that advertise during the show that we are a different kind of viewer, and that their advertising dollars are a bargain spent on Fringe. Fringe fans have always been noted for being passionate. Well, it is time that we put our money on the line to support those that support our beloved show. We’re taking a page from the Chuck fandom playbook, and going to war for Fringe. But this is a good war. Fought by doing things that we do anyway. Each week were are going to select a business that advertises for Fringe. It is important to concentrate our efforts as much as possible to gain a meaningful and measurable impact. So, be on the lookout for a ‘Fringe Event of the Week.’  We’ll post further specific instructions for each ‘Fringe Event’  business, but this is the general protocol:

The cool thing about McD’s is how widespread the business is around the world, allowing international fans to get involved.

1) Before the show airs on Friday, attempt to visit the targeted business and make a purchase.

2) If you have Fringe swag, might as well wear it if you can.

3) Be sure to ask for a receipt, and keep it. Make note of the store number is there is one.

4) If so inclined, take a pic of you, or your group, enjoying your purchase. Spread the word by tweeting it, or using it on Facebook, or Tumblr, etc. The idea is to let others know that your purchase was influenced by the company’s support of Fringe.

5) Be sure to leave feedback on the company website or in their suggestion box about your visit, and let them know your choice was partially influenced by their support of Fringe.

6) Tweet the company during Friday night’s airing, letting them know you support them for supporting Fringe. 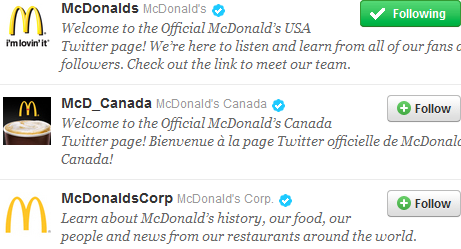 What Else Can You Do?

If you have cell phone service, many carriers support Fringe. Sprint is well-known from their product placement in the show. However AT&T, T-Mobile, and Verizon air commercials during the live broadcasts.
If you have a contract or prepaid service with any of them, why not include a note when you pay your bill, if you pay by mail? If you pay online, maybe send them a small note each month anyway, letting them know that you appreciate their advertisements during the show.

Apple has a lot of product placement. If you own any of their products such as computers, iPods, or iPhones, let them know, and thank them for support of an intelligent show like Fringe.

Please by all means encourage other Fringe fans that you may know to buy from the sponsors of the show and to let those sponsors know that Fringe fans are watching close, and voting with our money.

FringeTelevision.com has also compiled a handy video of the commercials that aired during the episode, “And Those We Left Behind.”  If you can, please Tweet and support some of these sponsors. The page at FringeTelevision has easy links to the accounts for these advertisers.

If you want to go the extra mile, write them emails and letters thanking them for choosing to advertise during Fringe.

Commercials are not an Annoyance. They PAY for the show we love.