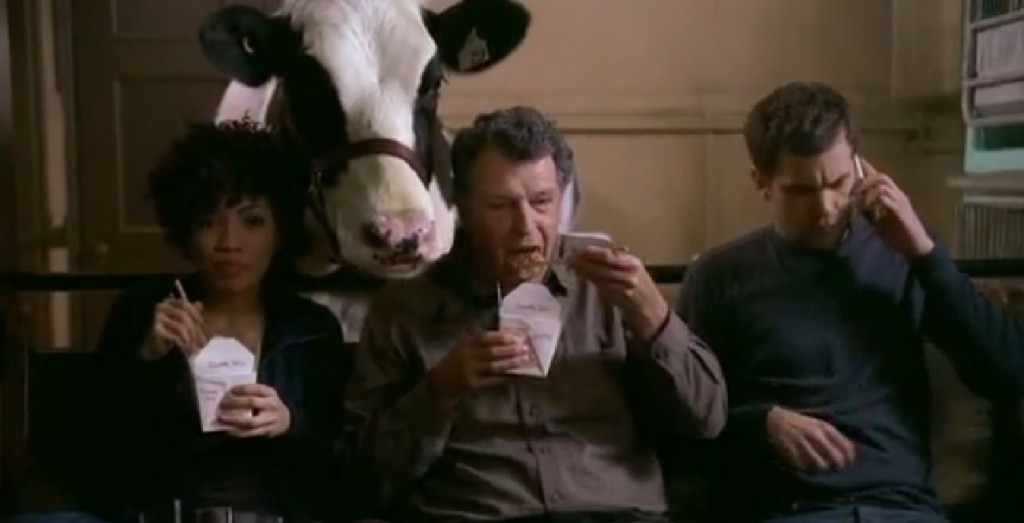 This past week, a Social TV Summit was held that included 200 television industry executives. What does this have to do with Fringe, you may ask? The answer is that the emergence of this activity – which blends watching television with social media outlets like Twitter- may very well be what keeps beloved, ratings-challenged shows like Fringe, on the air. It also gives insight to the business end of television –how can all of this activity possibly be used to monetize a show?

Fans can be quick to damn the networks for killing our favorite shows, but in the end, the system is set up to make profit.  Networks and production companies need to make money, and they are trying to figure out how to do so among the tides of change. As the saying goes, evolve or die. Hopefully Fringe will not be a casualty during this transition period.

As genre television fans, we are on the precipice of what may be the dawn of a new era in the measurement of entertainment consumption, and how it affects advertising. It is fitting that Fringe – always on the edge of Nielsen ratings doom – is the perfect experimental test subject. Fringe is actually lucky to have arrived during a time of great change.  Fringe fans are making history right now in the ways that we utilize different social media technologies when we view and talk about the show.  Since this topic is of great interest, for obvious reasons, I wanted to share some relevant information about the changes in television viewing and social media, as they relate to Fringe.

More choices and ways to view them then ever – same old black boxes determining what’s popular.

As we know, today’s television viewers are not the same as they were even five years ago. The digital recorder has shaken up the adherence to television programming schedules even more than the VCR ever did.  When I was younger, I had to record The X-Files on the Friday nights that I was in the marching band. And it was a pain in the rear.  However, DVRs are fairly easy to set, and can even be set remotely via computer or smartphone app. No longer do we have to race home to catch a show, or have to miss a favorite because of other obligations.

Science fiction fans tend to be very tech-savvy, and are often early adopters of new technologies. While this is great in some aspects, making us guinea pigs for marketers… it is not so good for our favorite television shows that still depend on outdated means to gauge viewership. The standard Nielsen rating, like it or not, is still king.  The advent of mobile electronic devices such as tablets and smartphones, make the viewing of video content available just about anywhere.  Services such as Hulu allow for delayed viewing of shows. Amazon video and iTunes allow for the purchase of commercial-free episodes. Which is convenient for consumers, but King Nielsen’s advertising court does not yet take too kindly to time-shifted viewing and Internet-delivered content.

There are also more programming choices competing for limited live views than ever before. All of this audience fragmentation has led to a dilution in Nielsen ratings. Here is an example:

The highest rated X-Files episode, “Leonard Betts,” aired after the Super Bowl on January 26, 1997. It had a Nielsen share of 17.2 and was seen by around 29 million people!

The Fringe pilot episode aired September 9, 2008, well-received with a Nielsen share of 3.2 and around 9 million viewers.

Even Fringe’s highest ratings were nothing compared to the days when there were fewer programming distractions.

Fringe fans are also very familiar with the concept of the “series binge.” Many people do not want to start a series when it is in full swing, choosing to watch it when it ends.  Or at least when there is a long hiatus.  Some people do not want to become invested in a series until they are certain it will not be canceled, thus leaving an unsatisfactory ending.  Some may have never had the opportunity to watch a series when it first ran. Netflix Instant streaming really helps to encourage this behavior.

This happened with me and LOST last year. When LOST first aired, I didn’t have time to commit to a serialized show.  As this series progressed, there were times I could have started watching, but didn’t.  I watched the entire series during the earlier part of  2011. I could not imagine having to suffer through all those cliffhangers when the show was on notoriously long hiatuses.  But part of me wishes that I was there to experience it as it unfolded, like I was with The X-Files and now with Fringe. I only recently caught up with Eureka, a show I found to be like Fringe in many ways. I wish I had tried it sooner.

All of these behaviors are blamed for a phenomenon known in the television industry as “cord-cutting.” Consumers are ditching their cable providers. This has made broadcast and cable networks very nervous, and some, including FOX, have scaled back online programming availability.

As I was reviewing the #SocialTV Twitter stream, I came across a statement concerning the advantages of merging of an audience with show creation. Networks are investigating the benefits of including the audience more into shaping the shows that they watch. Of course, this has always been true of shows like American Idol and Dancing with the Stars. Part of their appeal is the use of audience voting to determine winners.  It makes for easy integration into platforms like Facebook. Yet, scripted shows can also employ this loyalty rewarding tactic.  For instance, this may be in the form of instant feedback, as sometimes provided via Twitter to Fringe executive producers Joel Wyman and Jeff Pinkner.

Networks have used secondary materials to socially engage fans outside the actual viewing of shows.  Rabid fan-bases seek out extra outlets outside the hour time that their shows are aired. Fringe employs this tactic, which is known as “bridge content.”  The most well-known are the Sneak Peeks, texting of content, quizzes, the ingenious Glyph code, and ARGs such as “Welcome to Fringe Division.”  This content is often funded by sponsors, and this is the case for many of these Internet fan extras.  As we know, Nissan Leaf is a big sponsor, and so is Sprint.

Our zeal for Fringe is of a great benefit to the emergence of “social TV.” I’ve always felt that television audiences are not the same, and that a simple statistical accounting of alleged eyeballs watching a show, is faulty. I was pleased to see that some in the industry also hold this viewpoint.

“Nielsen is still the standard in measuring audience, although we think they do a poorer job of valuing a viewer.”

Amen! I’m sorry, but why should a Kitchen Nightmares viewer, not even really paying attention the show, count as much as a Fringe viewer who notices details right down to finding the Observer?

Fringe fans are also very connected to a “second screen,” whether it’s a tablet, phone, computer or some other Internet-accessing electronic device. According to Nielsen, this is the case for many television viewers across the globe. Their biggest challenge is figuring how this habit can benefit advertisers.

This also has led to the check-in services that we are familiar with such as GetGlue, and more recent contenders like Viggle.

This is an emerging market, and as such, there is already an overcrowding in providers for social television research services. The ones that I am most familiar with are Bluefin Labs and Trendrr TV. Each day, these services post charts concerning the social impressions generated by social media users about the programming that they watch. Fringenuity’s Twitter campaigns have propelled Fringe to the top a few times.

Power to the People

“Fans believe they have power to influence business of TV. And they’re demonstrating that they DO have that power.”

One of the presentations given at the recent Social TV summit was given by Ms. Tanner. She created a research presentation titled, Social TV & The Mass Market. Here are some points that Fringe fans will find of interest.

This is why we’ve felt so strongly about united Twitter events for Fringe.  They give us a voice, and they potentially expose others to the show. And they are fun, giving a sense of community.

We were so heartened when we found out FOX is supporting fan-based Twitter events for the rest of season four.

It shows they do care about the audience. Of course, there has to be some value to them as a business. Which is fine – we love the reciprocal relationship. In fact, this type of network-audience teamwork is recommended by industry leaders.  I asked Ms. Tanner about her thoughts via Twitter about FOX using fan-generated hashtags, and she replied, “Love it!”

Fringe fans, it is a brave new world, and our voices are among those being used to change a system that has ignored technology advancements for far too long.

No matter what happens with Fringe’s future, know this – we have done our part by using our creativity and will-power to not just accept the world as it is.

Take this power – this advocating for what we love- and apply it to other avenues in life. Let that positivity and empowerment be the legacy that Fringe leaves us.

In our families, jobs, communities, and world – be a better human being.

I recently read a wonderful book that is relevant to what Fringenuity and the Fringe fan base is currently doing. Social TV was a trove of information that really helped me understand the nature of television’s state of transformation. Anyone interested in the future of television marketing and social media will find this book an important part of their information arsenal.