Or a Nissan Leaf…

So what do these thoughts have to do with Fringe?

Social Media has been around for a while, with MySpace being one of the biggest early success stories. Then Facebook came along and supplanted itself as top-dog. Twitter has been around in some form for five years, but the micro-blog site is just now really being taken seriously in the realm of providing analytical feedback to television networks and their advertisers. GetGlue takes advantage of both of these platforms.

It’s funny that many Fringe fans know way more about TV ratings and social media than any viewer really should, but such is the nature of loving a masterpiece on the bubble.

An article was recently released by online industry publication, Ad Age. There is a lot to be gleaned here about the bearing that social media impressions and influence has on TV renewal decisions. Fringe is already one of the most social shows.

One of our Neural Network Brains (@Fringeship) had a great idea to meld two of the current strategies Fringe fans have employed to make our voices heard by both network and advertisers alike. Fringe fans make use of GetGlue in order to check-in to Fringe when ‘watching the show. The importance of this is especially stressed for live views, but any views – whether live, DVR, or DVD – are helpful. We’ve also taken to tweeting show sponsors and advertisers, thanking them for their support.

I’ve said it before, and I will say it again: Fringe fans are a different kind of viewer than the normal television audience. We are INVESTED in the show’s worlds, story and characters. We notice every little detail in the show, other than just having a television on in the background at home, which is the norm for many households.

This FACT is backed up by some of the article’s conclusions:

1. All of the top dramas had some sort of science-fiction, supernatural or paranormal theme

2. FOX has two of the top ten shows, with Fringe being #5. Only one other broadcast network, CW, can say the same.

Because of our attention span, we are a great audience for product placement.

Yeah, I hear people groan about that topic. But really, is the choice between no Fringe, or some flashes of the team’s Apple computers or Nissans really hard to make?

It is also a fact that network executives are taking social media into account. This works very well to our advantage, because as some of the most passionate fans on the planet, we know how to organize and make noise/buzz for our show. In fact, FOX has placed hash tags for its shows in the corner of episodes as they aired. The first show to employ this social media marketing was #Fringe.

So, please join us in making this effort a Cortexifan-powered success.

If you don’t have a Getglue  account, get one! You can post your check-ins to Twitter or Facebook. The more activity, the better, as this may also get other Fringies involved in the GetGlue check-ins. GetGlue also has convenient mobile phone aps for iphone, Android and Blackberry. 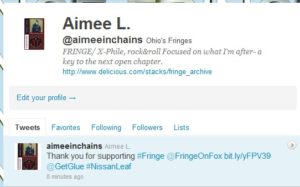 Hopefully, our efforts will offer some serious assistance to a renewal decision for Fringe Season Five. Especially if we get to the top of the Trendrr.tv Social Television Charts.