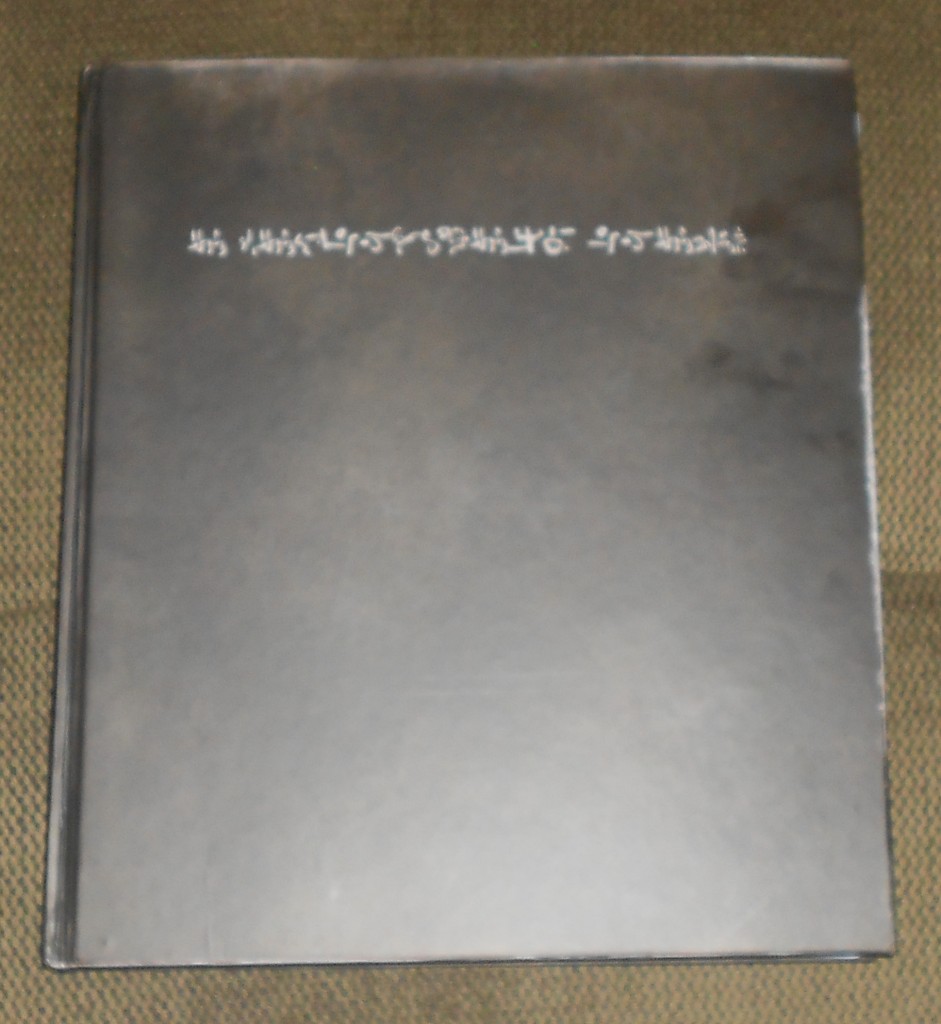 With wrap removed, the book is made to have a slightly distressed look.

After a bit of disappointment with a certain colossal Internet retailer regarding my highly anticipated pre-order of eight months, this gem reached my hands straight from the UPS man. (Thanks Barnes and Noble for not letting me down, unlike A-to-Z…)

I made sure that I had the afternoon free to peruse the book – that is how much I looked forward to reading it. After combing through it many times, I was ready to offer this review. Although it comes from a fan, don’t expect too much bias: This assessment also comes from a critical eye, and fans can be the toughest critics. So how does September’s Notebook stack up for this obsessed Fringe fan?

Who… or what.. are you? – Peter Bishop, The End of All Things

During the fourth episode of the series — The Arrival — we were introduced to Michael Cerveris’ character, who was referred to simply as, “The Observer.” This occasional character was credited with the name “September,” and he would play a pivotal role in important episodes such as Peter, The Firefly, and The End of All Things. He would also become a fan favorite. Little did we know early on just how much of an impact he would have over the course of the series.

As he observed the Fringe team, he took meticulous notes, and fans long wondered about the content and purpose of these writings.

When it was revealed that he was Walter’s friend Donald (Anomaly XB-6783746), he became like a part of the Bishop family to fans. As a father himself – to a special boy named Michael – he understood just how far people would go to save someone they love.

“It must be difficult.. being a father.”

I’d like to think that hidden deep within Walter’s heavy coat was the notebook kept by his friend, taken into a future which would be altered; a change that would ensure his friend would have essentially not existed.

These guys have the answers

This hefty tome is accessible to both casual fans and to those who are obsessed with every little detail of the production, story, and characters.

As a highly-invested fan, the forward by producers Jeff Pinkner and Joel Wyman started me off on an emotional note, and also underscored just how seriously the creative team took this project. They brought us an unforgettable story and beloved characters, so the “Fringe faithful” fought tooth-and-nail to make sure that the intended conclusion would happen. It worked.

Great thought was put into the organization and layout of the book.

The first section of the book deals with the backgrounds for Walter, Peter, Olivia and other agents such as Astrid, Broyles, Charlie Francis, John Scott, and Sanford Harris. Massive Dynamic’s origin, and the stories for William Bell and Nina Sharp, provide some insight into these two enigmatic characters.

September presents the facts of events he had observed in the blue universe, red universe, and amber timeline; and he also makes his own personal comments and interpretations on what appear to be blue Post It notes.

We get a glimpse of life for Walter when he first met Bell and when he married Elizabeth. The events from the episode Peter are given thorough observation, as are Walter’s interactions with Olivia during the Cortexiphan trials. Walter’s secret regarding Peter’s origin is of particular concern to September, especially when it led to Peter returning to his universe of origin, to Olivia’s entrapment and replacement by Fauxlivia, and to the use of the machine.

As a key component of the show’s mythology, the Machine, and its effects, received visually stunning extra focus.

My favorite pieces from the book deal with September’s observations of the relationship between Walter and Peter, and that of Peter and Olivia. His words mirror my interpretations of the love that these extraordinary people shared for one another.

Sadly, this book is not pure perfection, even coming from the viewpoint of an Observer. Some of the events must have come from another timeline, because they did not happen on screen as described in the book. Or maybe the Observer had the same issue that normal humans have when it comes to reporting events…

For instance, the notes for Olivia’s return from the alternate universe state that Olivia was pulled out of the tank by Peter when she made it back home (Entrada), and that they embraced.

In the on air episode, Olivia came back to the blue universe while Peter and Walter were still dealing with the arrest of Fauxlivia. Olivia stepped out of the tank in Walter’s lab and saw Astrid — who was confused and then happy to see her — before she fainted. Only then was she taken to the hospital. She later woke up to a relieved-but-terrified Peter, who was sitting by her bedside. He told her he was sorry (due to not knowing she was left behind), but she explained to him that he had no reason for being sorry,  that if it wasn’t for him, she wouldn’t have made it. (Because she kept seeing projections of him and they acted a guide to remind her of who she really was, and why she was there.) Only then did Peter kiss her forehead, all too aware that her happiness would be dashed when she found out just how far she had been replaced…

There are several more examples, but I’m not going to nitpick, because I am awed by everything this book got right. However, my suggestion is that some material could have been distributed piecemeal to die-hard fans to fact check. 😉

Soon, all you will have left is pictures

The importance of drawings and pictures has long been an interesting detail in Fringe. Examples include Roy McComb’s drawings in The Ghost Network, Olivia’s sketchbook in Subject 13, the drawing of Peter in the machine, the picture of Olivia, Peter and a child in The Day We Died, and the many times various characters have stopped to look at pictures of loved ones or at drawings.

The creators of this book took this idea to heart, and the number of never-before-seen pictures and diagrams alone makes this book worth the wait and every penny. Some of my favorites are posted at the end of this review.

My only issue is that a few of the “snapshots” are poorly photoshopped.

*edit* Author Tara Bennett pointed out something that I should have taken into consideration: These pictures were not altered by the book’s creative team, as they were provided by the production studio and the actors. For instance, John Noble gave permission to use actual family pictures.  Also, one of the crew explained that pictures used in the background of a set do not receive the same attention to detail as main character photo closeups.  Great to know!

The whipped cream on the strawberry milkshake

This book is overflowing with little goodies and extras from the series. Be prepared to be delighted by various pieces of cool reproduced “ephemera” from the show. These little pieces are mementos, much like the pictures and ticket stubs that Peter observed in the home of Alice Merchant in episode, 6B. They are proof that Fringe was real.

The only thing that could have topped this would have been the inclusion of a mini Violet Sedan Chair Seven Suns album. Fans still wonder about that promotion, and what happened to all of those supposed copies…

I own two other books from this publisher: The Complete X-Files and Freddie Mercury: The Great Pretender. Neither are even half of what this book is. In fact, the X-Files book was a great disappointment as far as written content goes, because it was riddled with way too many annoying and just plain wrong errors about episodes, characters and mythology.  As a fan, I expect an author who knows the subject… The few errors I pointed out here about September’s Notebook were nothing in comparison, and the authors are highly knowledgeable of their topic and audience.

Truly, I feel that the authors were powered by Cortexiphan, as they seemed to know exactly what Fringe fans wanted in an endearing keepsake of this beautiful and heartfelt family saga, as told through the lens of a man who saw it all. Great genuine love and affection were obviously poured into this effort, and it made a tremendous difference.

I am often wary of entertainment-based books because if I bother to buy such a book, it normally means I am a huge fan, and as such, I have high expectations. This book is what I expected and more.  Another copy will be purchased and locked away in case anything happens to the copy I now possess.

On a sentimental note: Even though September/Donald made the sacrifice of his own existence, as long as we have the paradox of his faithfully documented and illustrated notebook, he will be recognized, which means he existed.

Plus, the last entry in the notebook is the very essence of Fringe, and our fandom learned that lesson well.

Tara and Paul have earned an esteemed place as Fringe recordists.

If you haven’t had a chance to see the book yet, I strongly suggest that you

quit reading at this point. There are many surprises in this book, and part of

the fun in reading it is discovering them on your own.

My favorite Easter egg actually made me quite emotional. On the back cover, there is a small hashtag like those used on Twitter. It should be familiar to most Fringe fans on Twitter: #CrossTheLine. I never thought the day that we decided to do so would have led to this. Thank you, Tara and Paul. 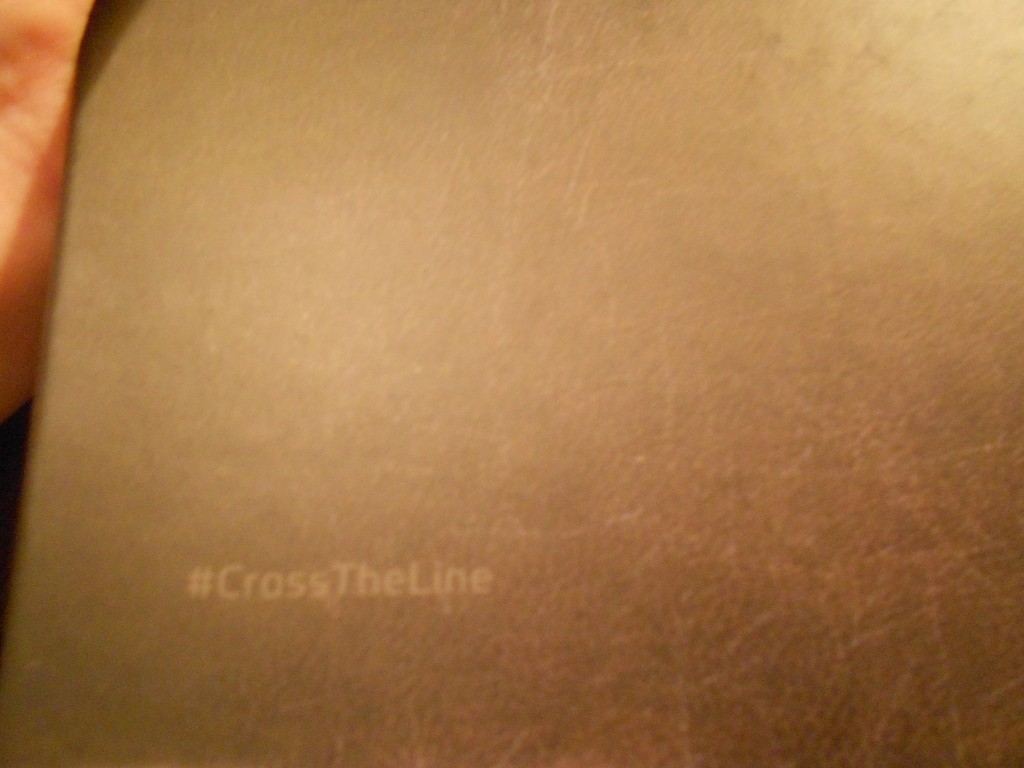 Peter’s Eulogy for Olivia is another appreciated and tear-inducing addition. When The Day We Died aired, the decision was made to only play Chris Tilton’s score as Peter started his words. While I enjoyed the haunting melody, I was disappointed that we didn’t get this rare glimpse into Peter’s feelings, especially after seeing the original scene as an Easter Egg for the Season three DVDs. So, this beautiful tribute that underscores the love of one man for the extraordinary woman who changed his life, really made me smile. I am so delighted that it was included. 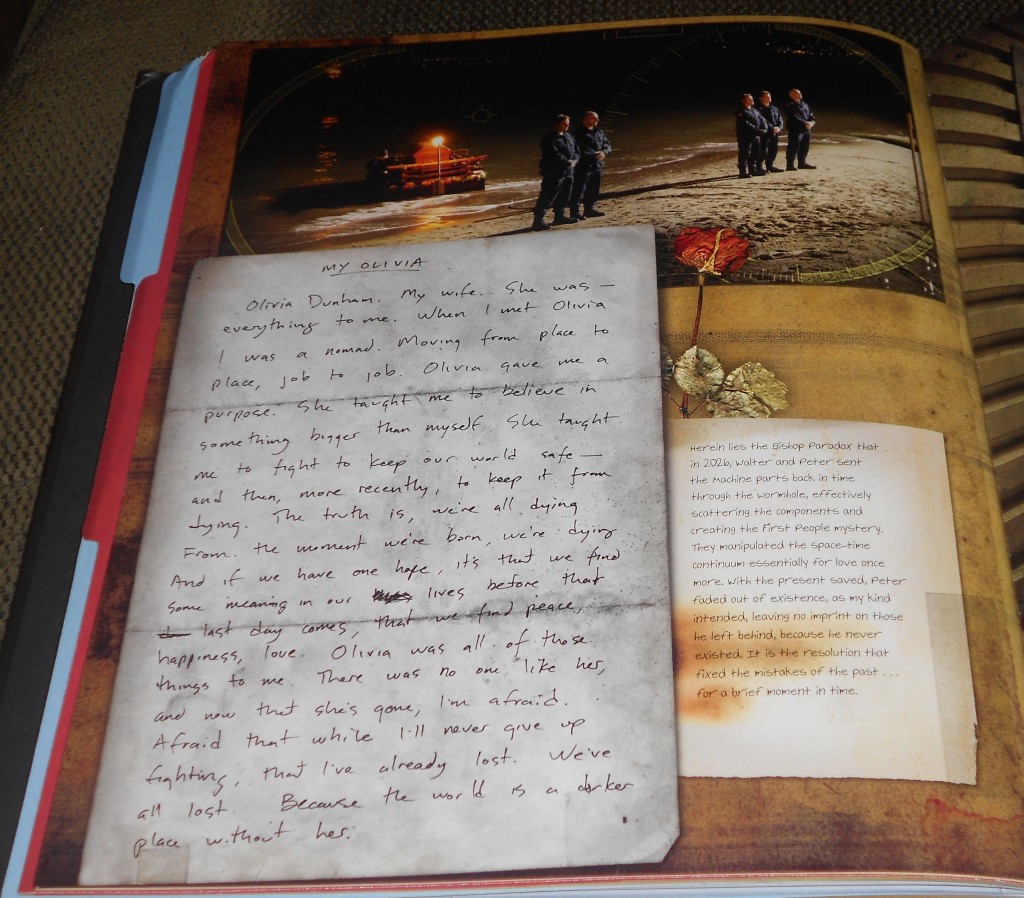 Olivia Dunham. My wife… was everything to me.

Olivia taught Peter to fight. Fringe taught us to fight. And it is a darker place now that it is gone.

The inclusion of the empty envelope that once contained Walter’s white tulip brought back those memories when Donald/September pulled the hidden notebook out in  The Boy Must Live, and gave Walter the tulip from the old timeline in order to give him strength. We know that the tulip that was once inside is now in Peter’s possession.

This only makes me want a full size resist poster. 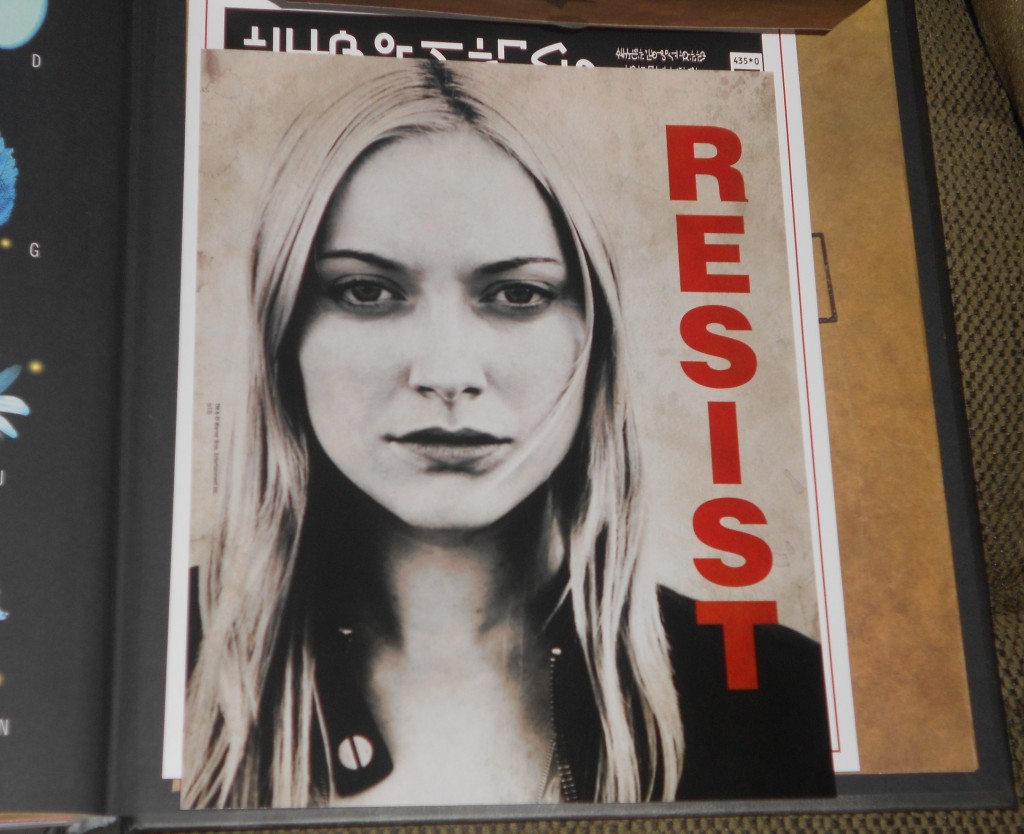 The picture of Peter and the machine. This reveal was one that I never saw coming. When September dropped it at the bar for Olivia, it was one of the biggest surprises in the series for me. And I was just as terrified for Peter as she was. 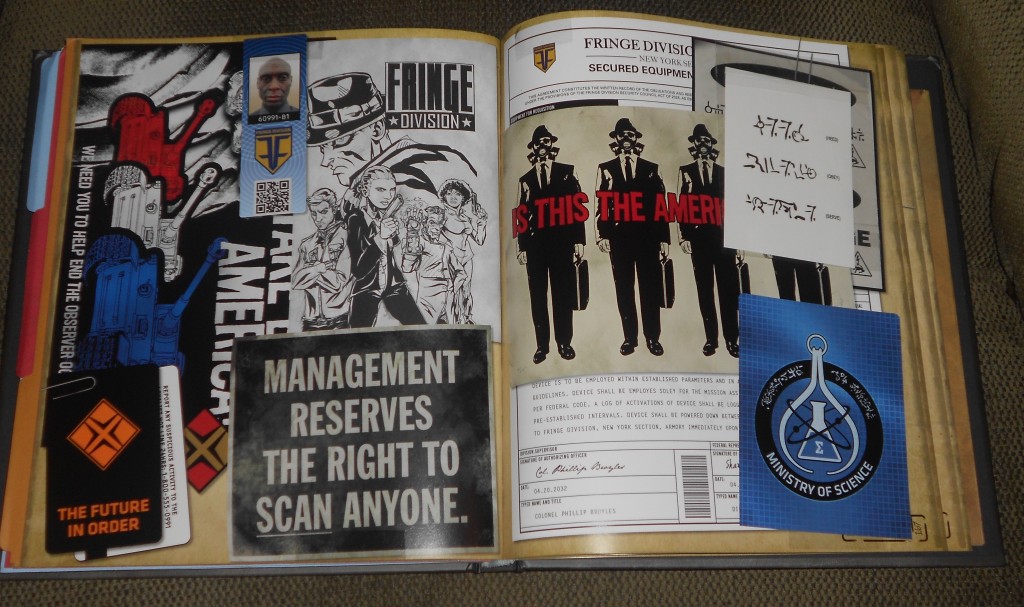 A future in disorder.