January 13, 2013 marks the anniversary of the very first Twitter event launched by this humble blog and its circle of geeky conspirators. Fringe fans crossed the line together on Twitter, hoping to make the trends list in order to gain attention for Fringe, by using the hashtag  #CrossTheLine. It was chosen due to several meanings; it’s a prominent saying in the show, the episode was about Peter doing everything in his power to get home to his loved ones, and it was a rallying cry for Fringe fans to see how far we could go for this show we love.

As I continue working on the book that I’m writing about the fandom, I stop to pause and ask, “How did we get here?”  I admit that even today, it all seems a little surreal to me. Well, for one thing, Fringe fans have the fighting heart of lions. I honestly don’t think I’ll ever be involved with such a dynamic, passionate, creative, and daring group of people again.

As I reflect, I wanted to give a little insight about how it all came together at the start. It was scary, and we were afraid of failure. But we did take that first step, crossed the line, and miraculously, others followed. And we know how far we all went—together.

This time last year, Fringe fans were on edge. FOX had publicly stated that the network was losing money on the show, and President Kevin Reilly said, “We aren’t in the business of losing money.” Everyone was worried, and that led to some negativity, rude comments about the network, and unorganized, desperate activities all in the name of saving the show. The dilution of the message was apparent.

On January 6, 2012 a group  of fans who associated with one another on Twitter organized a brainstorming committee via Skype in order to discuss any ideas that could garner attention for the show – anything that could help convince people to watch it or to show how valuable a small, but passionately engaged fan base could be. Several of us had been participants in activities—such as Twitter Force and Operation White Tulip – which were organized and executed by The Fringe Network. The lessons we learned from being veterans of the Fringe Friday move rally were definitely helpful and a tremendous influence, forming a piece of framework that we expanded upon. The number one thing we learned from those experiences was the power of positivity. Railing that the network sucks and threating boycotts achieves nothing. We had to make our fan base important to FOX – We had to make our voices valuable.

There was a leadership void in the fandom, as many of the folks from The Fringe Movement had moved on. It was apparent that trusted, knowledgeable and dedicated individuals would be needed. Three of us—me, Annie and Kelly—had been friends acting as “lone gunmen,” coming up with ideas to try and “save Fringe.”  That eventually morphed into a “Neural Network” that was based on Annie’s blog, “More Than One of Everything.  We committed to organizing a Twitter trending campaign for the season four mid-season premiere of Back to Where You’ve Never Been. In addition, another key element was devised; checking into the social TV service GetGlue for the show and more importantly, its sponsors/advertisers.

Most of all – we had to prove that we were not fly-by-night; that we were in this for the long haul. What we had found is that many trusted us – after all, we organized The Blue Moon Awards, were writers for Fringe Television, and we were generally well-regarded in the Twitterverse. We meant serious business — this wasn’t a game to us. The fandom support came — this effort would have not succeeded without it. Fringe fan and graphic artist/cartoonist Cheri Nowak and @Nikolai3D contacted us with an offer to make Twitter avatar icons for the event.

Word was spread via the major social media outlets and Fringe fan forums. Nikolai offered to develop his own tracker. Fans let guest actors and other Twitter users of influence know about the events and asked them to participate.

It’s important that you not only #CrossTheLine but that you cross it live! Fringe! All-New! Tonight! Watch It Live!

And we all succeeded: 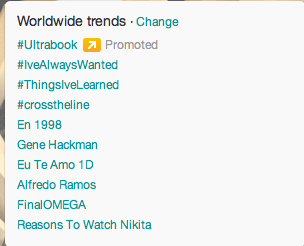 We generated a very limited Twitter hashtag report for the event.  This report and another more detailed report for the next event were sent to Warner Bros. President Peter Roth, along with other examples of Fringe fandom voices.

There and Back Again – Fringe Trending Campaigns #CrossTheLine

Social TV was really coming into vogue, and we were there at the right time to take advantage of it. We all know how the story played out. Once that line was crossed, there was no going back. By the end of this, Fringenuity will have hosted 27 Twitter events for Fringe episodes, each a success.

Thanks to everyone who believed in us at the start and those who have since joined the fandom during these events.

Thanks to FOX for listening to the fandom and for giving us five seasons of this beautiful show.

Thanks to Ari for convincing FOX to use the hashtags on air.

Although Fringe may be coming to end, please don’t despair. We reached our goal – a planned conclusion for the series. Take the lessons learned and apply them to life. Live your dreams. Be a better human being. Do what’s right in order to achieve your goals. This year marks one of great change for me, personally.  I’ve decided to finally commit to graduate school. Believe it or not, Fringe will have a small part in helping me get there.

How would you change the world if you could? What path will you choose?