Some of us spent a bit of time drinking and catching up in the venue’s bar Friday night. We heard Radiohead’s “Creep” playing, and thought of Fringe promo wizard, Ari Margolis. Not because of the song title, haha, but because they are his fave band. If things had gone differently, Ari would have been in Vancouver as well. He was there with us in spirit.

So… staying up until the wee hours and having to get up for a major walking tour wasn’t exactly a good idea, but hey, I’m a night owl, and chatting with some of my fave Fringies was one of the highlights of the trip. I skipped the morning debates to sleep a bit more, and because I am very passionate in my opinions regarding Fringe. I’m not a morning person in the least, so higher brain function was a bit much to ask for at 8 am in the morning. 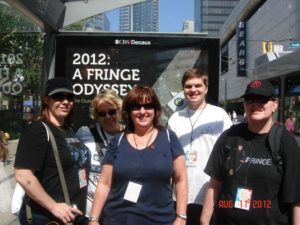 The walking tours started off fairly well, though I was not so well-prepared to pound concrete for almost 4 hours. We saw the steps where Walternate was made aware that Olivia had escaped from Liberty Island in Olivia, and the steps where Peter kissed Fauxlivia (Vancouver Art Gallery).

The alternate universe headquarters is the Vancouver Public Library. 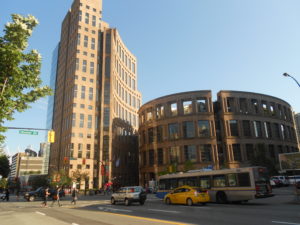 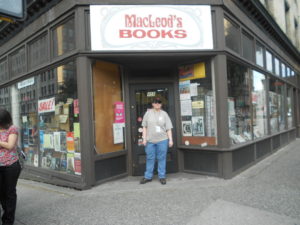 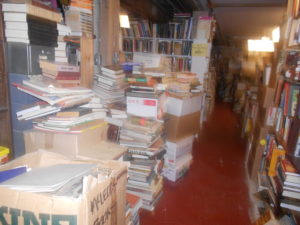 The Rosencrantz from episode 6B 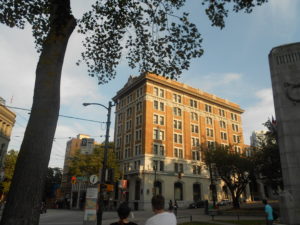 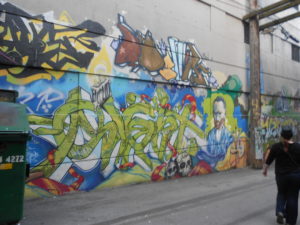 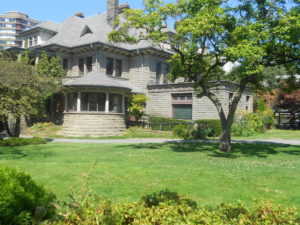 And there were a ton more places. One location that I’ve been to several times is Gelarmony, a gelato shop. It served as the location where Peter took Walter for a strawberry milkshake at the end of Marionette, as September stood across the street and informed his colleagues, “He is still…alive.” The clerk was more than glad to allow me to snap a pic as I geeked out. No strawberry milkshakes here, unfortunately, but their gelato is bar none the best. (On another visit, I heard Coldplay’s “Viva la Vida,” the song used in the Where Is Peter Bishop video. Talk about serendepity!)

The highlight of the day, and a crowning moment for the entire event was our trip out to “the Bishop house.” The house is beautiful and large, and is actually several units together; people do live there. There was a spacious, covered porch, stained glass windows, and a small patio with a chair… on the roof. It was enough to bring me to tears thinking about the place that served as home for the Bishop Boys, and a scene for so many pivotal moments in the series.

“You were abducted, of course you need crepes.”

“I’ve seen the two of us together, and it’s beautiful.”

“I remember. I remember everything.”

That night, I gave my presentation about the Fringe fandom. 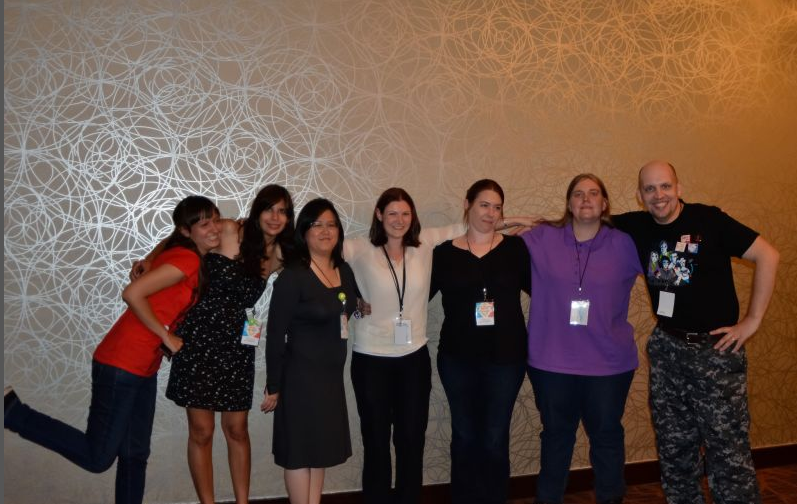 Afterwards, I was starving, so we sought out a bar with food and karaoke. Me, @birdandbear, @tribeoftyrones, and @agentdunhams had a great time. I tried poutine there for the first time and they made a fist rate alcoholic vanilla coke. It was hilarious watching Tas and Olivia dance around the karaoke bar, and we all got up there to sing a Fringed version of “We Are the Champions…” Video may exist, but I’m not sure if it should see the light of day. 🙂 So… once again… another late night, but damn, it was a blast. My feet were beat, so I skipped the excursion out to Rice Lake (Reiden Lake) in the early morning. I may wander out there before I leave Vancouver. 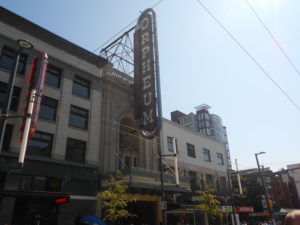 One of the best experiences of The Fringe Event was the tour we received of The Orpheum Theater. The history behind this old playhouse is very interesting, and our tour guides, especially Arthur, were quite knowledgeable and a joy to listen to. Arthur said that science fiction actually has a lot in common with the purpose of the theater; a way to open doors to other worlds. The ceiling dome over the seats of the theater was stunning, and we found out that the artist was friends with one of the theater’s benefactors, so some of the people depicted included the friend, his wife and children. There was one mural depicting Orpheus, a warrior, and a tiger. When asked what this meant, I replied, “Music tames the savage beast.” I recommend that fans acquaint themselves with the story of Orpheus.

We were given the opportunity to actually walk onto the stage, and of course we had to reenact the Cortexikid circle: 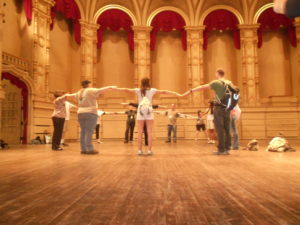 We were also treated to a view of the lighting room and a look at the rigging that held the dome in place.

The tour volunteers were impressed with Fringe fan’s level of curiosity and genuine interest in what they had to say. We were among some of the best tours they had every given due to our inquisitive and reciprocal nature. They taught us, and we taught them. 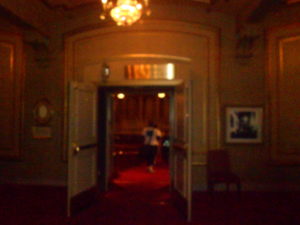 There were some more locations in Gastown, including the spot where Olivia and Peter had their reuniting, twirly kiss in “A Short Story About Love.”

After the tour, several of us had drinks at The Irish Heather Bar. There was a couple that actually kindly moved their seats when we we told them about Fringe filming there. (Everyone here has been so kind!) So, we were able to toast “To Agent Dunham” in the same seats that Peter and Broyles did the same in “A New Day in the Old Town.” Another big highlight of this journey. 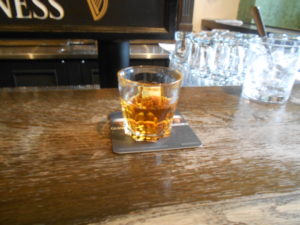 Then it was off to the Old Spaghetti Factory for the final Fringe Event goodbye dinner. This was a great celebration of the weekend, a thank you for the wonderful organizers, and a tearful goodbye to many amazing Fringe fans met through the weekend.