Well the Emmy nominations were announced, by Joshua Jackson no less, on Thursday. And once again our beloved cast has been royally and completely ignored by the ATAS, despite a season of incredible writing and some of the finest performances I’ve ever seen. John Noble and Anna Torv both delivered award worthy performances not only with their main characters, but with their alternates as well, and Joshua Jackson once again floored us with his understated but powerfully nuanced Peter.

If you’re here reading this, you know what I’m talking about. You saw what I did, what we all saw. The goosebumpy scenes of Walter pleading with God; of Walternate terrible and inexorable in defending his world; of Olivia ripping off her bedding and weeping on the floor as the implications of being replaced fully hit home; of Peter, helpless in his anguish at the pain he’d unwittingly caused her, and climbing with dignity and courage (twice) to whatever fate awaited him at the top of that scaffolding; of William Bell in Olivia’s body, creeping us all out when he spoke through her mouth. Their performances shocked us, exhilarated us, chilled us and made us cry, and they should not go unacknowledged.

So we’re not going to let them. 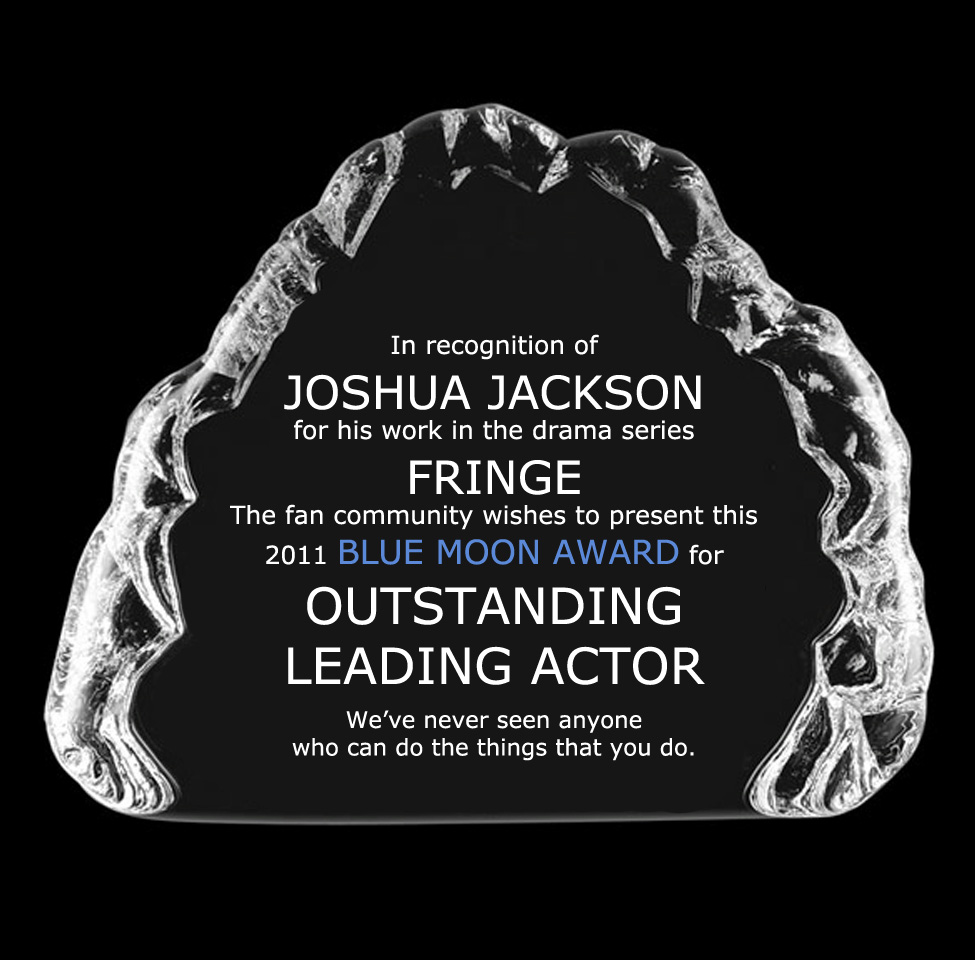 We, the fans of Fringe, who’ve watched, tweeted, worried and campaigned for our show, are now going to take it one step further. We’re making our own awards, dubbed the “Blue Moon Awards” (because it’ll be a blue moon before science fiction is recognized as an effective vehicle for dramatic storytelling) and we’re sending them to the cast. ALL of the cast. Because Fringe is an ensemble show, and every actor on it adds to it’s texture and uniqueness, and we love every one of them. So if you’re here, and you’re a Fringe fan, we’re asking for your help. We’re seeking to raise $500-$600 for the purpose of buying, engraving, and shipping our own awards to the season four production studio in Vancouver. The awards will be crystal “iceburgs” and will include recognition of:

Packaged with each award will be a personalized letter to the actor, detailing why we wish to honor them, and including any personal messages donors might wish to send along. We’re looking at a few different styles for the awards themselves, please check them out and vote for your preference.

We’re not a charity, and nothing you donate will be tax deductible. But you will be part of a historic fan campaign that could potentially spill over into some good promotion for the show, and will hopefully put some big smiles on the faces of those who work so hard to entertain us.  Any funds left over after the awards are paid for will be donated to http://www.autismspeaks.org, a charity organization supported by the Fringe team.

Please give generously if you can. Our first goal is to honor the actors who’ve been repeatedly snubbed despite their amazing performances, but I can’t help but think they’d be even more honored to hear we raised a good amount for Autism in their names.