The #CrossTheLine Twitter Effort and the Thinking about Get Glue Fringe Advertisers campaign were a smashing success! Thanks to all of you!

Here’s an amazing “After-Action Report” from our very own, Fringeship, that celebrates Fringe fan victories. It shows the power of a fandom united in purpose, willing to Cross The Line for the show we love.  – Aimee

The results are in. The campaign to make it known that legions of Fringe fans are present and do watch the show LIVE has been a phenomenal success.

We have grumbled that we are not Nielsen box carriers and we have on many occasions bemoaned our inability to make our voices heard. But on January 13th, the day of the Winter Premiere of Fringe (after an excruciating 2-month hiatus), the world heard Fringe fans unite to celebrate their love for the show.

With a twitter event successfully trending the #CrossTheLine hash tag worldwide (within 20 minutes of the event start) and over 13K check-ins to GetGlue topping trending charts there for Friday evening, we wanted to announce that we have been here all along, waiting for our show’s return. And in the US, the force of twitter chat even resulted in getting #Fringe to trend.

Here is the proof in pictures: 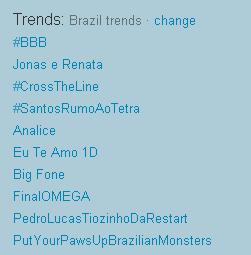 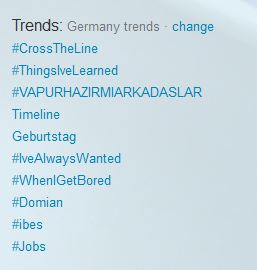 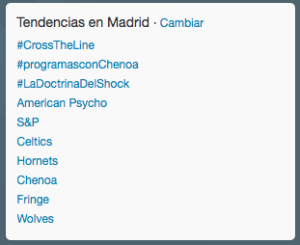 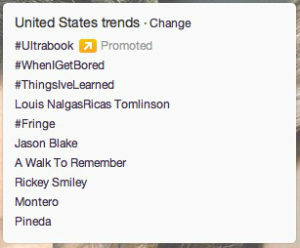 Under the new #Discover tab in twitter, what did we find but #CrossTheLine featuring a suspicious feline wearing a Fringe Division cap. The #CrossTheLine topic was comfortably nestled in that tab for hours on Friday. 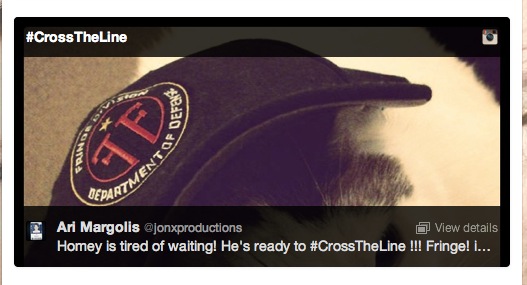 GetGlue check-ins received equally avid attention from fans. Fringe has enjoyed the top TV trending position for a number of Fridays and Jan13th was no exception.

And about checking in to sponsors? Well, we did not miss that Olivia in the amber timeline prefers the environmentally friendly Nissan Leaf. The Leaf was a trending topic, behind only hockey…and um, basketball. 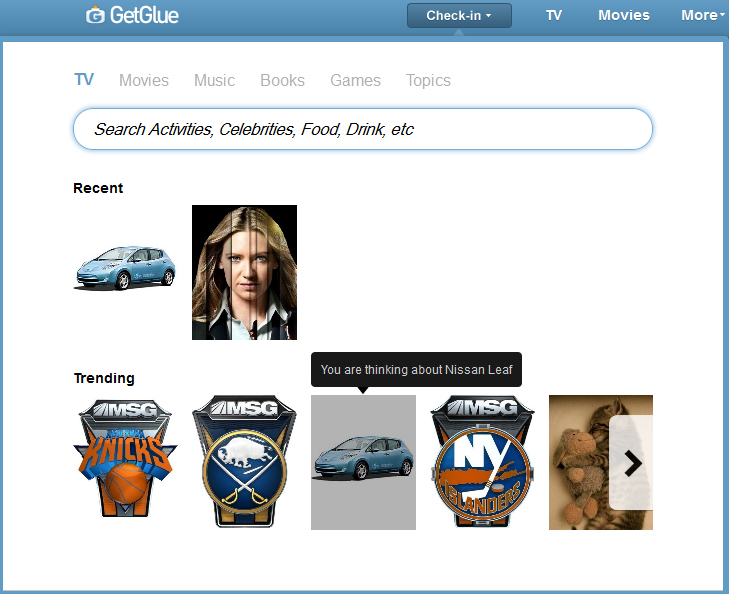 How did we make this wonderful thing happen?

What started as a discussion on Jan. 8th on Skype between a few Fringies, turned into full blown mission to make sure all Fringe watchers were aware of the Fringe’s return to TV via a twitter campaign.  The hash tag was selected for its elegant simplicity and its representation of what any one of us fans would do to support the brilliance that is Fringe.

The twitter campaign was then paired with a GetGlue idea to check-in to sponsors and advertisers of Fringe during live watch. We understand that Nielsen tracks viewership to determine the number of eyeballs for each show and that this matters for marketers who are paying top dollar for commercials to be strategically placed. We also know that for networks, that is how shows are paid for, through commercials. So what better proof but to show marketers that there is perhaps a huge segment unmeasured by Nielsen, than through checking into GetGlue live during commercials – evidence that we are indeed watching LIVE.

What made these two events so extremely special was the collaboration of Fringies spread across the entire globe, willing to come together for one true cause. Fringies whose only connection to each other was a tweet or a RT. The enthusiasm was enormous, the first YouTube video promoting the twitter event posted hours after that ad hoc Skype conversation. Soon other promo videos followed and a number of us were contacted by fans who wanted to contribute and had some rather brilliant ideas to get the word out, including rallying support from past guest stars of Fringe to #CrossTheLine with us. Others spent tireless hours getting the twitter word out, being diligent in reminding fans not to use the hash tag until the right time.

Icons were requested for the event to be worn as badges of honor. That too allowed Fringies to step up and show their creativity. By mid-week, our campaigns had taken off, even garnering attention in an online news article. The GetGlue campaign received focused support as well, as it made it across the tumblr universe via some key help.

Multitasking was no easy feat for the Fringe fan on Jan 13th. Fringies needed to execute these two campaigns, while following Fringe writer David Fury (@dfury), who was live tweeting during both east and west coast airings, and focus on the mind-bending “Back to where you’ve never been” episode.

The Fringies to whom we are grateful to in making this quantum entanglement experiment work are too numerous to thank individually, but you all have our deepest gratitude. There are a few contributors whom we would like to acknowledge for their special role in these campaigns.

Special Tumblring GG: Zoey’s Tumblr Post with a quote from producer Joel Wyman about our devotion shown by contacting sponsors and advertisers.

We are planning more campaigns in the weeks to come and invite you to participate. Check back for more information on the hash tag for next Friday…

While “the box” continues to the be the primary way by which networks assess viewership, the way people consume television programming is changing and there are other methods to capture viewership.

A gallery of support for and reach of the #CrossTheLine tweet campaign: