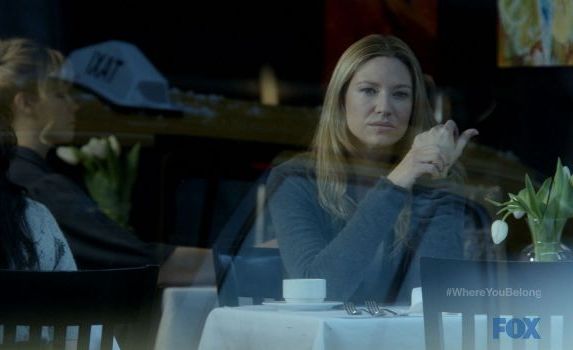 Truly, the best experience on Friday March 23rd, 2012 during the airing of “A Short Story About Love” was watching tweet reactions as fans witnessed the #WhereYouBelong tag on the bottom right corner of the screen when the episode started…but I am getting ahead of myself.

The nearly month-long hiatus has a difficult one given the situation that left our protagonists Peter and Olivia decidedly…apart. With Fringe’s return, fans will be rewarded with 8 straight uninterrupted Fridays of new Fringe episodes. Fringenuity intends to be there with fandom for every one of them with social media campaigns to support and bolster the show and keep fans and newcomers excited and watching live.

We knew the networks were starting to pay attention to the campaigns, but we were thrilled beyond belief when we were informed that FOX was contemplating displaying the campaign hashtag on the screen. This is a great moment for all Fringies that have been with us on this journey and experiment to try something different and be noticed as non-Nielsen viewers. FOX’s gesture signifies both the network’s support of Fringe and acknowledgment of fans of the show.

A day before the twitter campaign, Damian Holbrook, Senior Writer for TV Guide revealed in an exclusive article that FOX was going to broadcast #WhereYouBelong in place of the #Fringe tag usual found on the TV screen during the airing. (Click here for full details).

The twitter campaign launched with a big bang, landing #WhereYouBelong in the Worldwide trends within minutes of event start. The hashtag trended solidly for an hour and in numerous countries including Argentina, Australia, Brazil, Canada, Chile, France, Germany, Indonesia, Italy, Spain, the UK, and the US. 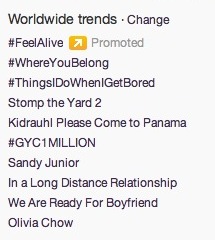 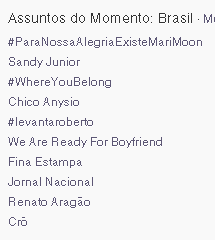 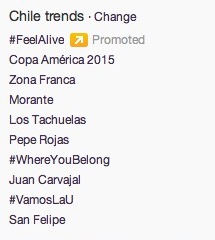 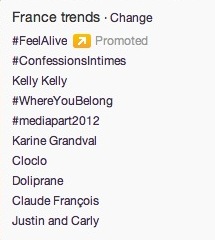 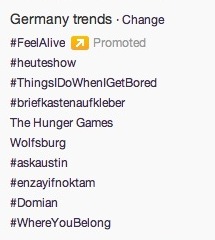 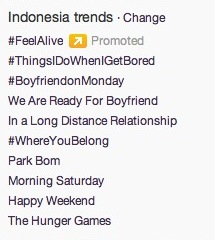 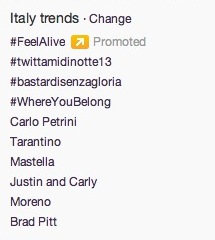 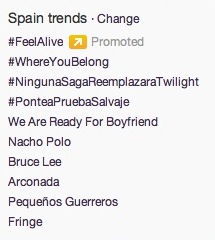 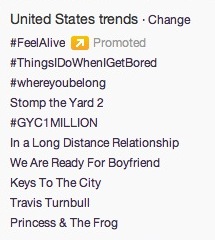 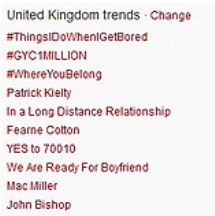 *These were the best screencaps that I could pull from various countries.

Some stats (tracker by @Hashtracking)

We’ve increased the number of contributing tweeters by nearly 10K since our #LoveIsTheAnswer campaign. The tweets contribution overwhelmingly came from the collective fandom as opposed to a few core contributors. 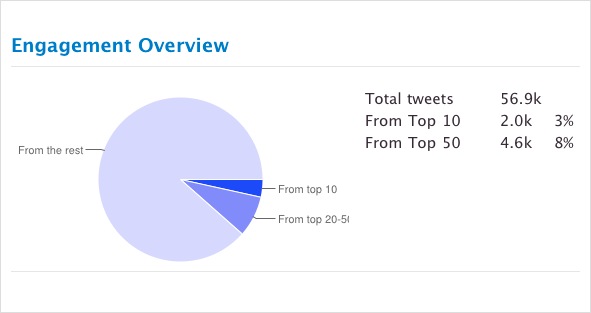 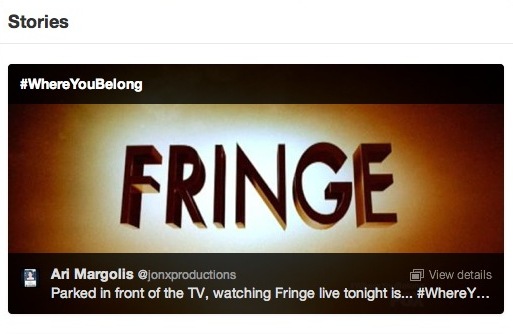 And a definition of #WhereYouBelong when it hit the Worldwide trends: 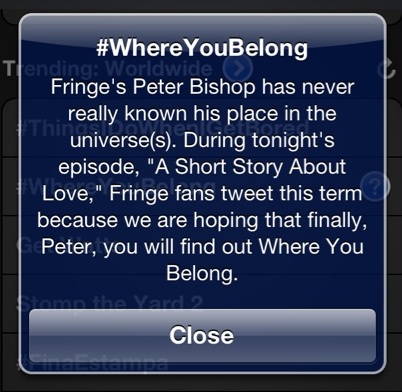 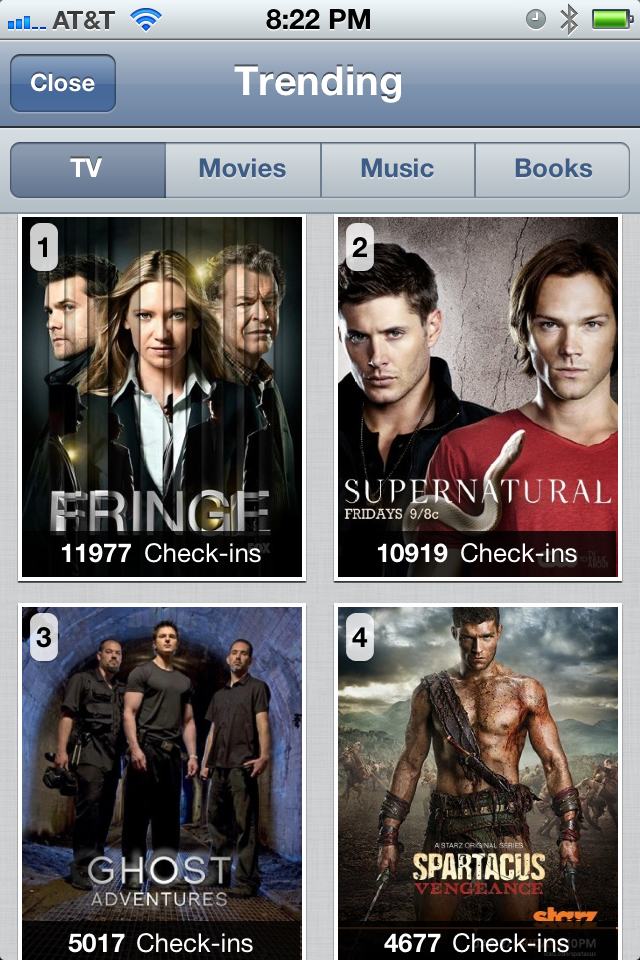 To give you some perspective of the power of this fandom, #FeelAlive was a hashtag promoted (read paid) by JaguarUSA during the same time the #WhereYouBelong event ran. #FrozenPlanet was also a promoted tag (nearly a week before) by The Discovery Channel launching a series co-produced by Discovery and BBC. Below is an illustrative graph comparing the hashtags (from topsy.com). Are you in awe of Fringe fandom now? 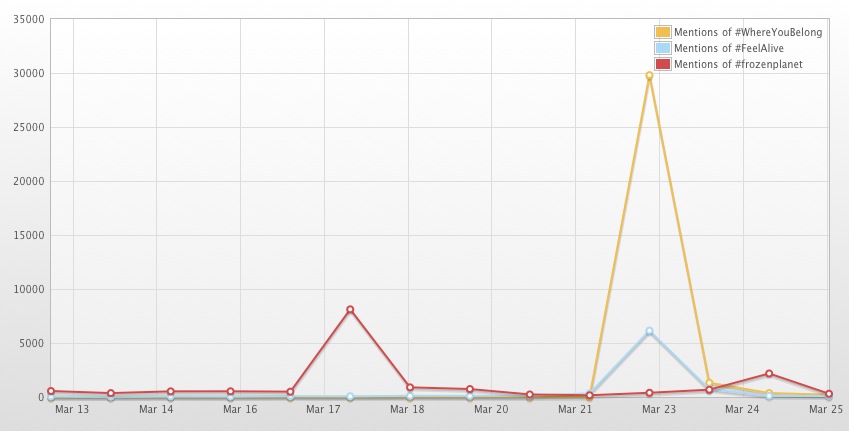 I know that there continues to be a certain level of frustration that all this activity has not translated into an uptick in Nielsen ratings. Remember Fringies, these social media campaigns are aimed at getting networks and studios to rethink how audience and viewership is measured. We want to be counted! Keep up the enthusiasm and momentum and participate in these Friday campaigns and continue to let your voices be heard and let’s make history together.

We are grateful to Damian Holbrook for his article in TV Guide.

Thank you to Joel Wyman, Josh Jackson, and Michael Cerveris for their wonderful livetweets and interaction with fandom.

Special thanks to Ari Margolis, FOX, and @FringeOnFox for making this wonderful experience possible.

Some fan reaction tweets to #WhereYouBelong on screen: